Accusations of cheating are nothing new in South American football. The latest scandal, however, could have major implications ahead of the 2022 World Cup in Qatar. It involves an international court battle between the Ecuadorian and Chilean football federations that is surrounded by nationalism, name-calling in the press and decades-old grudges.

To summarize, rather than going all the way down a legal rabbit hole: Chile alleges that Ecuador fielded an ineligible player during the CONMEBOL World Cup qualification process, including for two matches against Chile — a 0-0 draw on Sept. and a 2-0 victory for Ecuador on Nov. 5 16. The player in question is Byron Castillo, 23, a right fullback who Chile claims was born in Colombia and falsified his naturalization documents.

Chile wants cancellation of the 14 points that Ecuador earned from World Cup qualifying matches in which Castillo featured. Doing so could elevate La Roja into the fourth and final automatic berth, currently held by Ecuador, and drop Ecuador to the bottom of the table. Chile would be awarded two 3-0 wins over Ecuador that would keep them ahead of Peru on goal differential. Peru are currently fifth and will face either Australia or the UAE in an intercontinental playoff.

Ecuador’s federation denies any wrongdoing, while the Chileans have supplied FIFA with stacks of documentation, and laid out an alleged history of fraud by Castillo dating back to 2015, when Ecuadorian club Emelec halted a loan deal for him after his paperwork did not comply with Emelec’s due diligence process.

Francisco Egas, the president of the Ecuadorian football federation, told local media that the federation has handled Castillo’s paperwork by the book. Egas said he understands that the organization will be asked to argue their case, but that the federation remains “calm.” Ecuador national team manager Gustavo Alfaro echoed Egas’ position during a recent interview with The Athletic’s Andy Naylor. Alfaro does not believe that Ecuador is in danger of missing the World Cup.

“I’m very calm that we’ve done things the right way,” Alfaro said. “Once I was appointed, I asked about the players I could select and the legal hurdles for some of them. Damian Diaz, for example, who was Argentinian, qualified in March to play for Ecuador. We waited a couple of months before actually using him. It was the same with Byron Castillo. He was cleared in April and the first game he played was in September. We did everything according to the rules, so I’m very confident that we’ve done nothing wrong.”

But Ecuador’s tranquility is under threat. The Chilean federation presented FIFA with a similar case in which the sport’s governing body disqualified the Equatorial Guinea women’s national team from the 2019 World Cup. In that instance, Equatorial Guinea also used players who were found to have falsified documents.

“These are serious crimes,” said the Chilean federation’s lead attorney, Brazilian Eduardo Carlezzo, to EFE recently. “We’re talking about a crime. The use of false documents is a crime in any country and it deserves severe punishment on the part of FIFA.”

Chile not only wants Ecuador out of the upcoming World Cup, but also banned from qualifying for the 2026 World Cup. Carlezzo suggested that Castillo should receive a lifetime ban from international football. On Thursday, FIFA opened “disciplinary proceedings” for the case, which has been celebrated in Chile, but met with skepticism in Ecuador and throughout South America. Carlezzo has said that he expects a final decision to be made within the next 30 days.

However, the court proceedings will pale in comparison to the oddities and score settling that have taken place surrounding this matter.

“Chilean football needs to be burned down.”

That was the title of Ecuadorian columnist and outspoken entrepreneur Vito Muñoz op-ed on Studio Fútbol last week. Muñoz paraphrased a now infamous statement by former Chilean FIFA vice president Juan Goñi, and made his case that cheating has long been a part of Chile’s football culture.

“Chilean football needs to be doused in paraffin and lit with a match,” Goñi declared after Chile finished last in Group 4 at the 1966 World Cup in England, behind the Soviet Union, North Korea and Italy. Chile’s performance was deemed a total failure. In his column, Muñoz blames Goñi and Juan Pinto Durán, another former influential Chilean CONMEBOL official, for conspiring to keep Ecuador out of that World Cup in England, implying that they bribed two CONMEBOL referees. Muñoz then mentioned what is today still considered one of the most heinous attempts of sabotage in world football history.

During a 1989 World Cup qualifier between Chile and Brazil, with Chile losing 1-0, Chilean goalkeeper Roberto Rojas appeared to be struck by a firework that was thrown from the stands inside Brazil’s Estadio Maracaná. While he lay on the ground, Rojas used a small razor he had stashed inside one of his gloves and cut his forehead. A bloodied Rojas was carried off the field by his teammates, who then refused to return to the pitch. The match was called off.

An investigation later revealed what Rojas had done. Brazil were given the three points, which eliminated Chile from qualifying for the 1990 World Cup. FIFA then banned Chile from the 1994 World Cup qualification process, and Rojas was banned for life from the international game. Chile has not been able to shake that stigma, despite legitimate successes in CONMEBOL since then.

“Cheating and corruption have always been a quality of Chilean football, that’s why their federation president, Sergio Jadue, was exposed and became an FBI whistleblower during FIFA Gate,” Muñoz wrote last week.

Chilean football blog RedGol responded to Muñoz’s column with some humor and sarcasm, taking shots at the Ecuadorian magnate’s inherited fortune and his extravagant sense of fashion. The blog post referred to Muñoz, 65, as prudish, “speaking” (a little crazy) and as “el Muñeco” (the doll), a nickname attributed to Muñoz in Ecuador due to his history of dating much younger women. Muñoz’s current wife, his fourth marriage, is 42 years younger than him. The pettiness is all part of a bizarre story with as many sordid twists and turns as the Wagatha Christie trial.

“Maybe this guy was stressed out because he already bought plane tickets to Qatar,” the author wrote.

Castillo has been declared both Colombian- and Ecuadorian-born by reporters, lawyers and sporting officials. One Ecuadorian journalist thought he solved the dilemma by reporting that Castillo was, in fact, born in Ecuador, and that his brother, now deceased, and curiously named “Bayron,” was the Castillo sibling who was born in Colombia. The validity of that report is uncertain. How did Carlezzo respond to this alleged evidence?

From talking to friends in Colombia, the Castillo case is seen as nothing more than a tabloid story, which may be more of a reflection of how my WhatsApp group views most CONMEBOL scandals and drama. Colombia’s national team could be dealt a faint lifeline if Ecuador are disqualified from the World Cup, but you wouldn’t know that from reading the coverage. Castillo’s story is being covered in Colombia as a relevant international news story, but void of any opportunism. Colombia finished sixth in CONMEBOL qualifying and failed to reach Qatar after a nearly 700-minute scoreless streak.

Other outlets around South America have written explainers and continue to track the legality of Chile’s petition. Meanwhile, on social media, Chile is being trolled relentlessly. The comments section of an Instagram post on the Castillo case from Argentine news outlet Diario Olé was littered with jokes at Chile’s expense.

“Chile, any time a national team could lose their ticket to the World Cup: ‘Can we go?’,” wrote one commenter. “Chile, you guys have always been small-time,” wrote another. “Chile was an embarrassment during qualifying and this is how you want in?”

Others alluded to the fact that Chile will watch their second consecutive World Cup in high definition by referring to La Roja as “Chi-LED.” In fact, on May 6, Castillo posted a photo of himself on Instagram during a match with Ecuador and captioned it with emojis: a spinning star, the Qatari flag and a television. 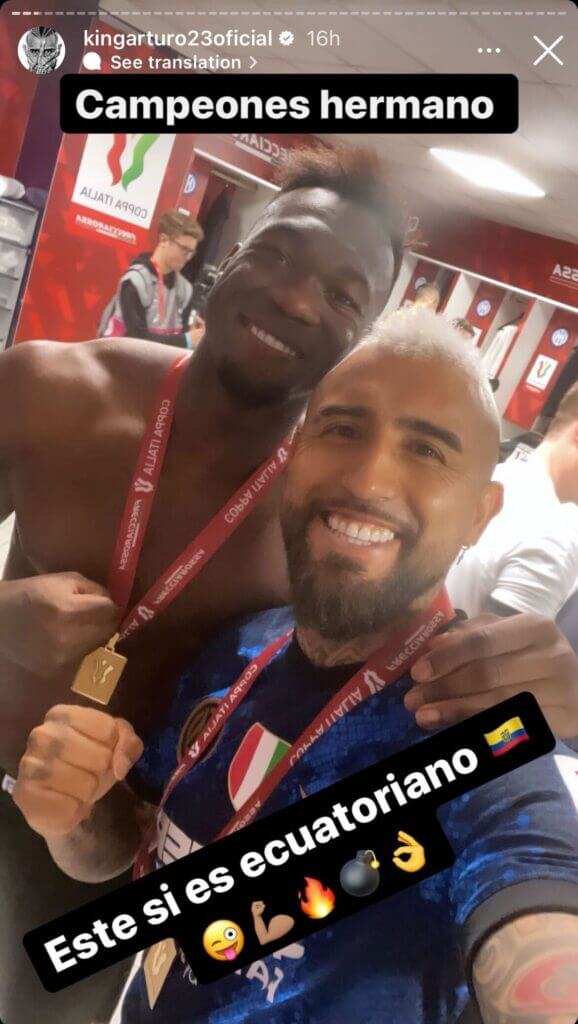 Argentine journalist César Merlo, who also covers Chilean football closely, told his 110,000 Instagram followers that the likely outcome of this ordeal will not include a shock World Cup qualification for Chile. Merlo expects Castillo and the Ecuadorian football federation to be fined by FIFA, and with that, the case would be closed.