Inflation across the G7 has climbed to multi-decade highs, but whereas in the US or UK that means alarming levels of 8 or 9 per cent, one country stands out as different: in Japan, high inflation means just 2.5 per cent.

Furthermore, while the US Federal Reserve and the Bank of England are rushing to raise interest rates, the Bank of Japan says it will keep policy on holdbuying as many bonds as it needs to keep 10-year yields pinned at zero per cent.

The divergence illustrates a fundamental difference in Japan’s inflationary psychology after three decades of price stagnation. Even though Japan is heavily exposed to some of the same shocks as other countries — notably the increasing cost of imported commodities — there is almost no pass-through from rising prices to higher wages.

On the contrary, said Masamichi Adachi, chief economist at UBS in Tokyo, the deflationary mindset means the pressure tends to go the other way. “In Japan, increases in import prices can lead to deflation. That is why it’s hard to imagine inflation can be sustained in Japan.”

In the US and Europe, companies usually respond to a rise in raw material and commodity prices by transferring those costs to consumers. In Japan, however, businesses fear a public backlash if they raise prices, while workers — beaten down by decades of stagnant pay – do not demand the higher wages that would let them afford higher prices in the shops.

If companies must pay more for imports but cannot increase their retail prices, they will suffer a squeeze on profits. They often react by seeking to cut wage costs, ultimately creating deflationary and not inflationary pressure.

According to government data released on Friday, Japan’s consumer price index was up 2.5 per cent in April compared with a year earlier while core consumer prices, which exclude volatile food prices, rose at the fastest pace in seven years, hitting the BoJ’s target with growth of 2.1 per cent. But stripping out the impact from food and energy, prices were up just 0.8 per cent from a year earlier.

The BoJ, along with most economists, is convinced that underlying demand in the Japanese economy is weak. It, therefore, expects with greater confidence than its counterparts in Europe and North America that the current bout of inflation will be transitory and will fade out once the impact of higher import prices has passed through the system.

Several other factors help to explain why Japan’s inflation is lower than in other advanced economies and why analysts think it is less likely to endure.

First, a big chunk of the April inflation number reflected the disappearance from annual comparisons of cuts in mobile phone tariffs engineered by the then prime minister Yoshihide Suga last year. That means underlying inflation is less than the numbers suggest. 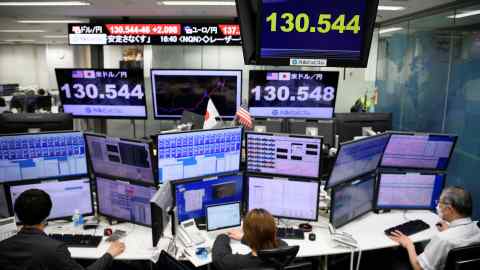 Second, Japan’s economy has yet to recover to pre-pandemic levels, even though the country has never imposed the strict lockdowns carried out in other parts of the world. While there were fewer restrictions on economic activity, people have continued to take precautionary measures, even after most of the elderly were vaccinated against Covid-19. Japan is still closed to tourists. That has hit consumer spending hard.

Third, while weakness in the yen used to provide a big stimulus to the economy, that effect is more muted than in the past. Big Japanese companies have relocated much of their supply chain to China. Demand for the capital goods Japan still exports has been heavily hit by the weakness of China’s economy.

“In addition to the rise in commodity prices, the impact of the [Covid] lockdowns in China is serious, so manufacturers may find it difficult to expand revenue this year,” said Kiichi Murashima, Japan economist at Citigroup. “Companies also see the impact of the weaker yen as a temporary windfall and do not want to increase fixed costs [by raising wages].”

The BoJ is confident that such inflation as Japan has will subside and it needs to support rather than restrain the economy. “The rise in prices expected in the short run will be driven by energy prices and lack sustainability,” said the bank’s governor Haruhiko Kuroda in a recent speech. “There has been no sharp increase in medium- to long-term inflation expectations.

“I would like to re-emphasize that the current situation of Japan’s economy is completely different from the United States and Europe,” he said.