Going into the final day of the Premier League campaign, so much remains at stake.

Is the title headed to Manchester City or Liverpool? Will it be Arsenal or Tottenham Hotspur playing in next season’s Champions League? Can West Ham United finish ahead of Manchester United and qualify for the Europa League? Who manages to avoid relegation out of Leeds United and Burnley?

To have so many unanswered questions should create a Sunday filled with drama, ecstasy and heartbreak in equal measures.

But supporters watching from the UK will only be able to — legally — watch three matches, therefore potentially missing key moments, whereas those in America, for example, have the option to choose from all 10 games.

The Athletic explains why…

What are the key fixtures?

The standout matches are Manchester City v Aston Villa and Liverpool v Wolves because either of the home teams can still win the Premier League title. Both of these games are being broadcast on Sky Sports.

Elsewhere, Arsenal v Everton and Norwich v Tottenham Hotspur are also crucial due to the race to finish fourth and qualify for the Champions League.

At the bottom of the table, Brentford v Leeds United and Burnley v Newcastle United are significant because the third relegation spot needs to be filled and it will either be Burnley or Leeds who go down.

Sky Sports picked Brentford v Leeds as the fixture they will screen live alongside the Manchester City and Liverpool games.

Why are only a handful being shown?

Although it is the final day of the season and so much remains undecided, there are the same number of games available to Sky Sports (three) for live coverage as there would be for any other weekend.

The only difference is that everyone kicks off at the same time for sporting integrity reasons, which is the same process seen in the final games during the group stages of an international tournament.

BT Sport used their allocation last weekend, which is why they are not showing any of Sunday’s fixtures.

Why isn’t every match broadcast in the UK?

There are myriad reasons for this, one being that the Premier League does not sell the rights to all 380 matches per season.

For years, Richard Scudamore, the league’s former chief executive, was aware of the dangers involved with diluting the market with too many games. Less can sometimes be more, and that is certainly the case with how England‘s top flight thinks.

The Premier League is seen as a prized asset, so it is shrewd from a business perspective — especially in the UK — to keep consumers wanting more because the demand remains high.

For the 2019-22 UK broadcast rights, the number of matches made available to screen live climbed from 168 to 200, which is mainly down to Amazon Prime and BT Sport acquiring the final two of the seven packages. 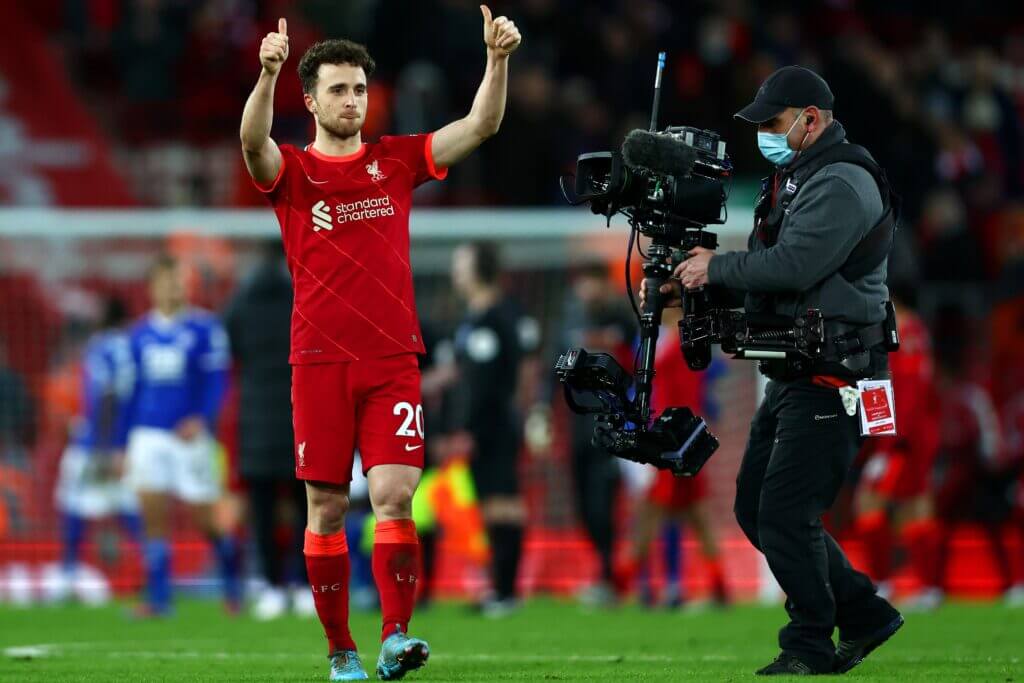 Liverpool’s match against Wolves will be shown in England on Sunday (Photo: Clive Brunskill/Getty Images)

Is this to do with the ‘blackout’?

And it is a major factor as to why the Premier League holds its final round of fixtures on a Sunday.

The blackout rule has been in place since the 1960s and prohibits matches from being shown between 2.45 pm and 5.15 pm on a Saturday to protect attendances throughout the EFL and all divisions below the Premier League.

Saturday at 3 pm is the traditional kick-off time for all weekend games in the United Kingdom.

It is designed to help clubs who rely on gate receipts as opposed to TV deals for the majority of their revenue. By moving their final round of fixtures to a Sunday, it allows the Premier League to have multiple games broadcast simultaneously.

What is the deal overseas?

Some will look on with envy at the package on offer to supporters in America as they have the option to watch any game they want to.

NBC Universal, the American broadcaster which holds exclusive rights to screen the Premier League stateside, has access to all 380 games and recently extended their TV deal until 2028 at a cost of over £2 billion (more than double what they paid in 2015).

It is worth pointing out that overseas broadcasters don’t have to worry about the impact on attendances of other leagues and sports, while also not having to be concerned about match-going fans.

American consumers can watch the games via the NBC Universal network: Manchester City vs Aston Villa will be on the NBC channel, Liverpool vs Wolves is on USA Network, Norwich vs Tottenham can be watched via SYFY, Arsenal vs Everton on CNBC and Burnley vs Newcastle on Golf.

All matches will be streamed on Peacock Premium, too.

NBC is sending Rebecca Lowe, their US-based studio host, to Anfield while their UK-based team will be at the Etihad Stadium.

Other countries — because of the broadcast deals they have in place with the Premier League — such as BrazilChina, India and Mozambique, among others, will be showing all 10 games. 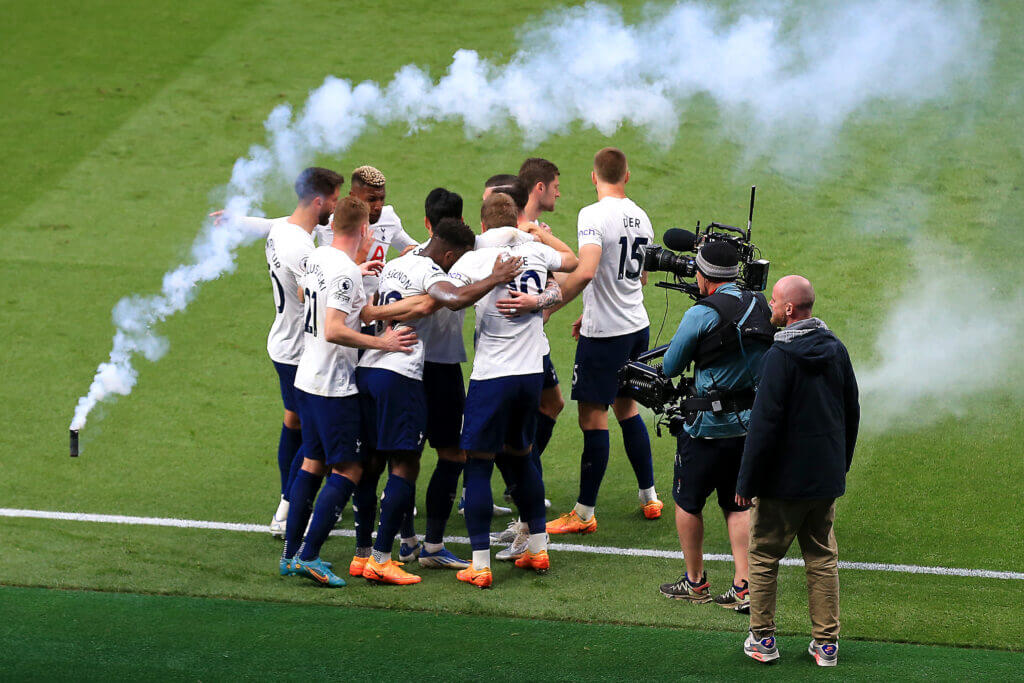 How will fans follow games that aren’t on television?

Supporters can either wait for the highlights on the BBC’s Match of the Day program on Sunday night, follow The Athletic’s live blog, keep checking social media or tune into their local radio station (as long as they have a broadcast deal).

In previous years, Sky Sports tended to show a quick glimpse of what is happening in the other games they have the rights to, should something significant happen.

The reality is that, because of the absence of official broadcasts, a significant chunk of fans in England will watch their teams play on illegal streams.

Do experts think this should change?

“It is not an easy question to answer simply because of the implications it has throughout the system,” explains Paolo Pescatore, the founder and technology, media and telecommunications analyst at PP Foresight. “Fundamentally, this comes down to the rights and how the Premier League wants to package those rights moving forward.

“There was an extra slot that was found (Saturday, 7.45 pm), so it is not as if the Premier League is alien to the idea of ​​making more games available.

“It’s more of a question of trying to maximize the value of the rights but also striking the right balance of not killing the product, which is a prized asset.”

Pescatore explained how the pandemic helped the Premier League and broadcasters experiment by screening multiple games, but suggested the cost to show certain, maybe not the most glamorous matches, live would have cost more than it was worth.

“We are not talking about £50,000; we are talking about serious money beyond the initial investment to secure the TV rights,” he added.

“When you have more matches available, the impact it has on the overall viewing is something to consider. At the time all of those games (during the pandemic) were available on a Sunday, some of those games were not widely viewed and did not really justify the investment put into them.

“That would be a partial explanation as to why we may not see that happening moving forward.”

BT Sport renewed their three-year deal — at a cost of £1.2 billion — with UEFA to have the exclusive rights to broadcast all 420 games.

Interest has remained high in the competitions even though supporters, you could argue, are diluted with several matches to choose from but they tend to be big-ticket games due to the nature of who plays in the Champions League.

For example, a neutral fan is probably more likely to want to watch Barcelona vs Real Madrid than Burnley vs Norwich.

“It has been a phenomenal success by having someone like BT Sport on board as the exclusive broadcaster in the UK because they have made all the matches available on small-screen and large-screen devices,” added Pescatore.

Is this the same in other sports?

Blackouts in America are commonplace and there are several different types, including location-based, device-based and streaming-based.

Location-based blackouts are then split into two categories: national and regional. If a national broadcasting network (Fox, CBS, ABC etc) has the TV rights to a sports game, fans that live in that team’s area are unlikely to see it on another channel, meaning they need to subscribe to the national network.

A regional blackout means that only consumers in a specific area can watch the match as opposed to it being viewed by a national audience.

Will it change in the future?

The blackout rule has been around since the 1960s, so you would not think that will be changing in the immediate future.

Furthermore, the Premier League extended its TV rights deal last year and that will run until 2025.

That means it won’t change in the UK until 2025 at the earliest, and even then you would expect the Premier League to avoid, as they have managed to do thus far, diluting the market and diminishing their product.