MOSS LANDING, Monterey County — The sea otters tumbled onto pickleweed along the estuary, a pup nuzzling its mother for milk as she tried to groom it. Soon they were a rolling bundle of wriggling brown fur, each animal’s flippers and head indistinguishable from the other’s.

“They’re always touching,” said Jay Fukushima, a volunteer with the Monterey Bay Aquarium, speaking of how mother and pup interact even when resting in the water.

Fukushima was at the Elkhorn Slough helping conduct an annual census of sea otters on the California coast to monitor how the threatened species is doing. The stakes are high: Federal wildlife managers are studying whether it would be possible to return sea otters to parts of the West Coast where they thrived centuries ago before being hunted almost to extinction. Some scientists have suggested otters could be reintroduced to the Sonoma-Mendocino coast or San Francisco Bay.

Sea otter numbers have been largely stagnant in California for over a decade. Scientists want to expand their range, since the animals help restore the state’s estuaries and once-vast kelp forests, thus buffering the effects of climate change. But fishers and divers are reluctant because the otters like to feast on valuable species like Dungeness crab, sea urchin and abalone.

An expansion of sea otters on the West Coast could lead to an uptick in tourism, experts say. With their rascally energy and teddy bear faces, otters are more relatable than other marine mammals for the way they seem to relish their food and stick together. They rest in the water with heads popped out like someone enjoying a mud bath, the rest of their bodies a low line in the water with only their rear fins poking through the kelp. 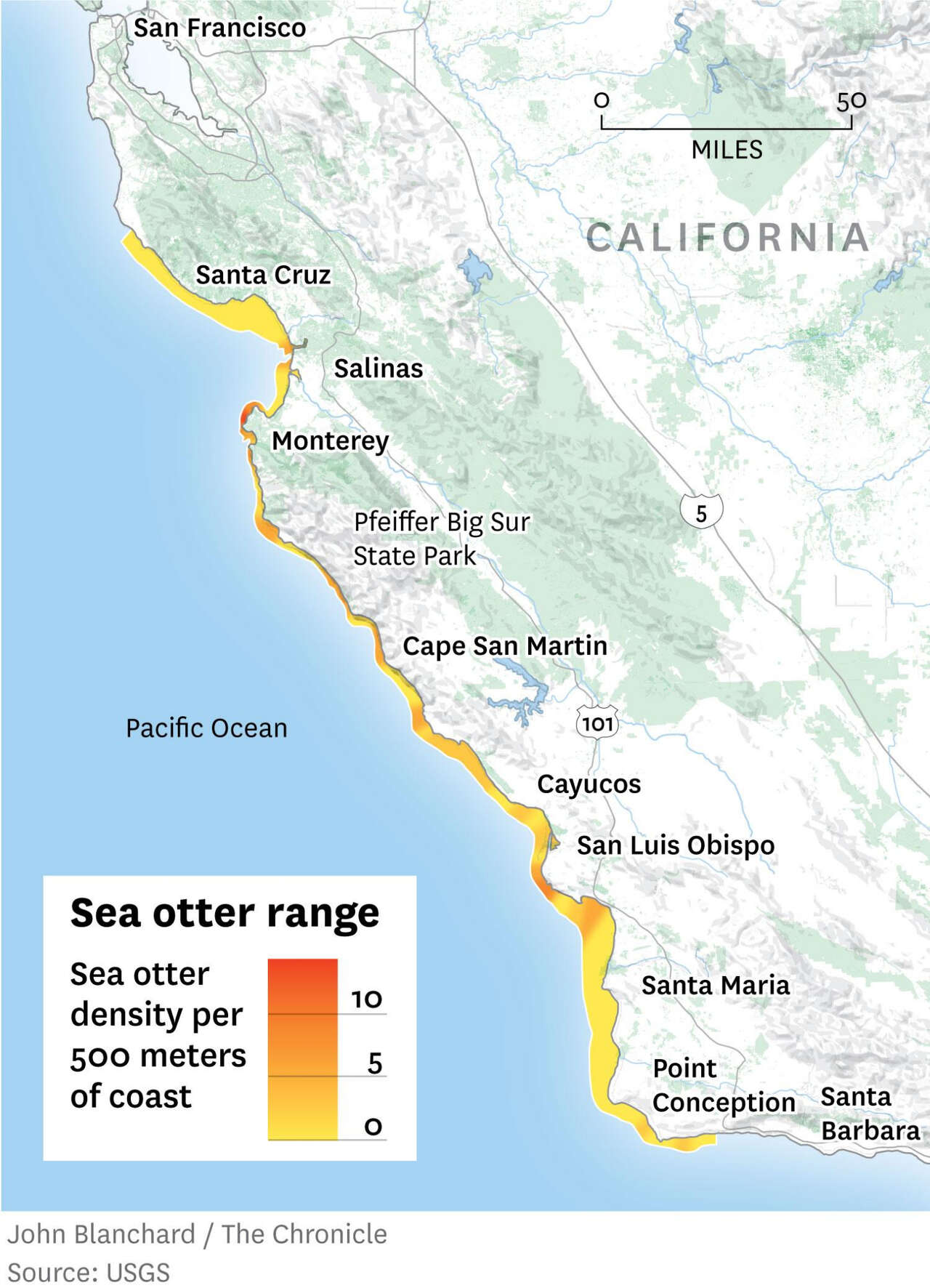 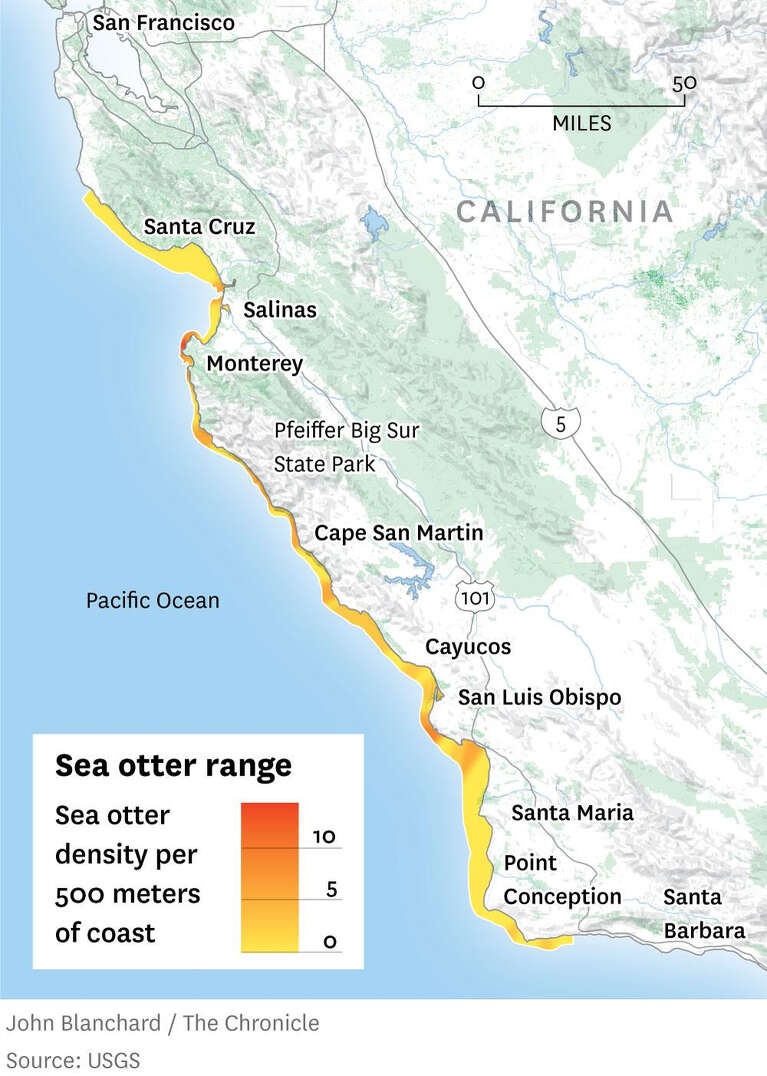 But the bigger potential benefit is to seagrass and kelp forests, which absorb large amounts of carbon dioxide and protect coastal areas from erosion due to sea level rise, thus helping fight the impacts of climate change.

Otters eat sea urchins, which can devastate kelp forests. On the Monterey Peninsula, for example, the kelp forests declined by about 60% in recent years as a marine heat wave limited their growth, and the population of purple urchins — which eat kelp — exploded.

“Otters are helping to maintain those remnant patches of kelp forest,” said Joshua Smith, a postdoctoral scholar at UC Santa Barbara, who has researched the subject along the Monterey Peninsula.

That’s why some ecologists say reintroducing otters to the Sonoma and Mendocino coast, where the kelp forest has been even more devastated than in Monterey, holds promise.

Centuries ago, sea otters could be seen on the coastline of the entire northern Pacific Rim, from Baja California to Alaska and Japan. But the 18th and 19th century fur trade almost wiped out the densely furry mammals. In California, where there were once an estimated 18,000 to 20,000 otters, a tiny population survived in Big Sur. Aided by reintroduction programs, the population increased to around 3,000, where it has stayed for many years.

But reintroduction is a complex process. In California, sea otters’ natural range has remained limited to between Santa Barbara and Pigeon Point in San Mateo County for 20 years, mostly because of sharks on either end. About half of the dead sea otters that wash ashore have shark bites, compared with about 10% 15 years ago, said Joseph Tomoleoni, a biologist with US Geological Survey, which oversees the annual sea otter census.

The increase in bites is likely related to a growing white shark population. But if otters can help restore kelp forests, it may also ease their shark problem: When otters rest on kelp canopies at the ocean’s surface, it’s harder for the predators to spot them.

The US Fish and Wildlife Service was required by Congress to put together a feasibility study by the end of 2021 to see whether it would be possible to reintroduce sea otters to other parts of California, Oregon and Washington. The study is “not yet finalized,” and there is no definitive publication date, a spokesperson said.

The big downside to reintroducing otters to California’s North Coast is that they also eat red sea urchin (a larger variety than the purple urchin), which are harvested commercially. They also eat Dungeness crab and red abalone — a sea snail sought by sports divers that was a big source of tourism until that fishery was put on hold as the species’ numbers dwindled.

“As a fisherman, I don’t think it’s a good idea to unnaturally move sea otters, because they’ll naturally move themselves where they want to be,” said Larry Collins of the San Francisco Community Fishing Association.

Sea otters also have a remarkable impact on marine life in estuaries, in part because they do eat crab. At Elkhorn Slough, a vast open waterway adjacent to the Moss Landing fishing harbor, runoff from Salinas Valley agriculture created excess algae that smothered seagrass, an essential part of the ecosystem.

But as the sea otter population rebounded there in the early 2000s, so did the seagrass. The reason was likely because the otters ate the crabs that ate the sea slugs that hoover up algae, according to research by Brent Hughes, assistant professor in biology at Sonoma State University. Seagrass is now back to historic levels, he said.

“These sea otters are probably having a huge effect,” he said. “It’s been this remarkable case study of recovery in face of the stressors and challenges seagrass faces.”

Hughes has studied otters returning to the San Francisco Baywhich has enough food resources and space to hold 6,600 — double the current California population — and to smaller, more pristine estuaries like Drakes Bay and Tomales Bay, which together could hold 500. But many risks would have to be addressed first, like pollution and marine traffic.

Elkhorn Slough holds 100 to 150 sea otters, California’s largest population, about half of which are a result of a surrogacy program at the Monterey Bay Aquarium. There, captive female otters raise rescued orphans that are released in the slough when they’re old enough. The day of the census, aquarium staff counted an otter there with white whiskers overhanging its mouth like a Mark Twain mustache, chomping on a giant white clam it had pried open on its buoyant abdomen.

Hughes studied whether the expanding sea otter population in Elkhorn Slough impacted the local Dungeness crab fishery and found it did not. But he said the risks of expanding their reach still have to be assessed, such as the impact to indigenous communities.

“The key is making sure that issues are addressed as best as possible before any decision is made,” he said. “But, I think wherever we look, we see the benefits.”