Heading into tonight’s Western Conference Finals Game 5 between the Warriors and Mavericks, there have been 35 second- and third-round games in the 2022 NBA playoffs. Those 35 games have featured a grand total of 29 minutes played in “clutch” situations (when the score is within five points with five minutes or fewer remaining in regulation or overtime), spread across 10 games. That is to say, the outcome of 25 of the 35 highest-stakes games of the season has never been in any real doubt.

The complete absence of late-game drama has been noticed:

Average margin of victory has been 19.8 points. There’s been a total of 7 clutch time minutes.

Looking strictly at the frequency of blowouts, this postseason is on pace to be the least competitive since 2004. Through Tuesday, nearly 29 percent of all playoff games were decided by a margin of 20 or more, edging out 2016 (27.9 percent) and 2017 (26.9 percent) 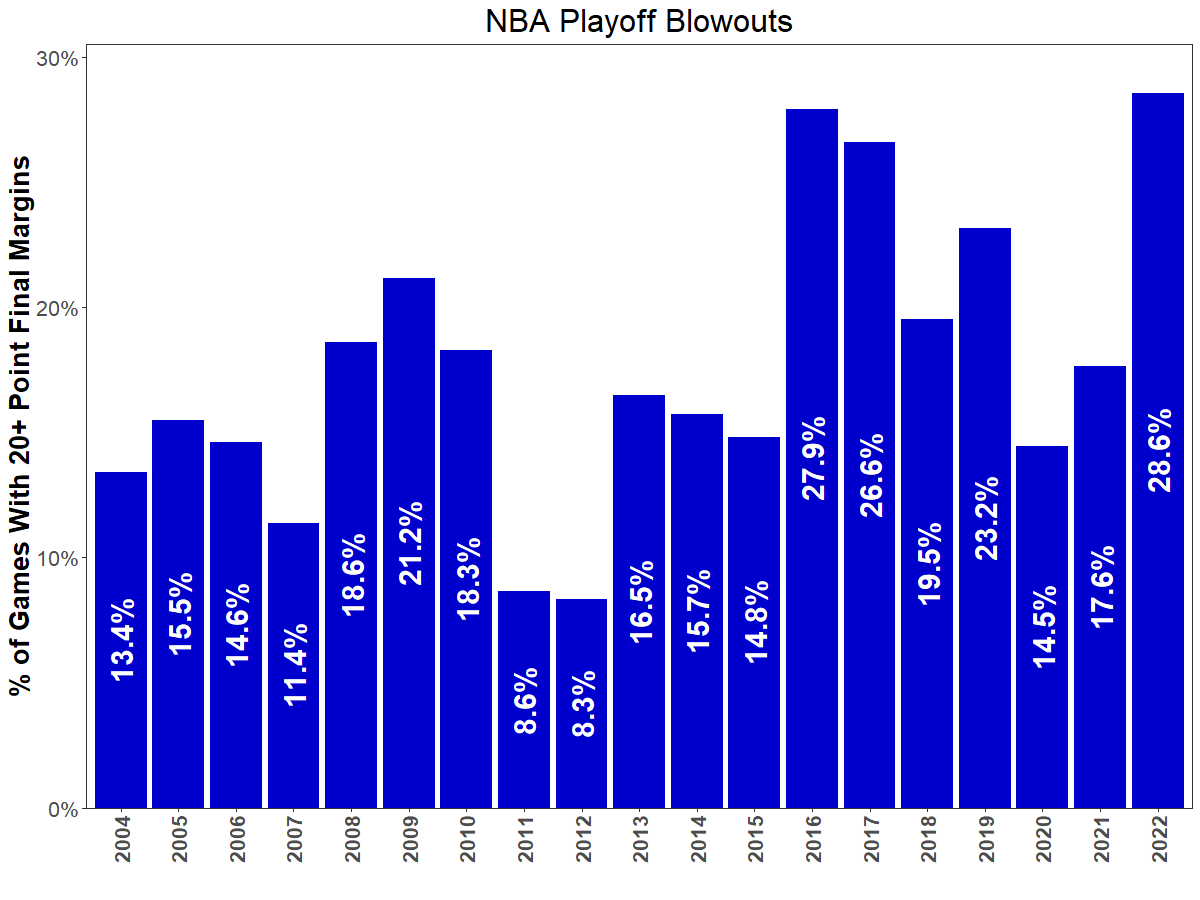 To some extent, this apparent increase in recent years is a reflection of games featuring higher possession counts. According to Basketball-Reference, the 2004 Playoffs were played at a pace of 88.4 possessions per 48. Thus far, the 2022 edition is at 95.6 – nearly two possessions per quarter faster.

Instead of raw scoring margin, it may be more useful to compare the proportion of games in which one team had a Net Rating of +20 or higher. By that measure, this postseason has seen a greater than average, but not unprecedented frequency of big wins: 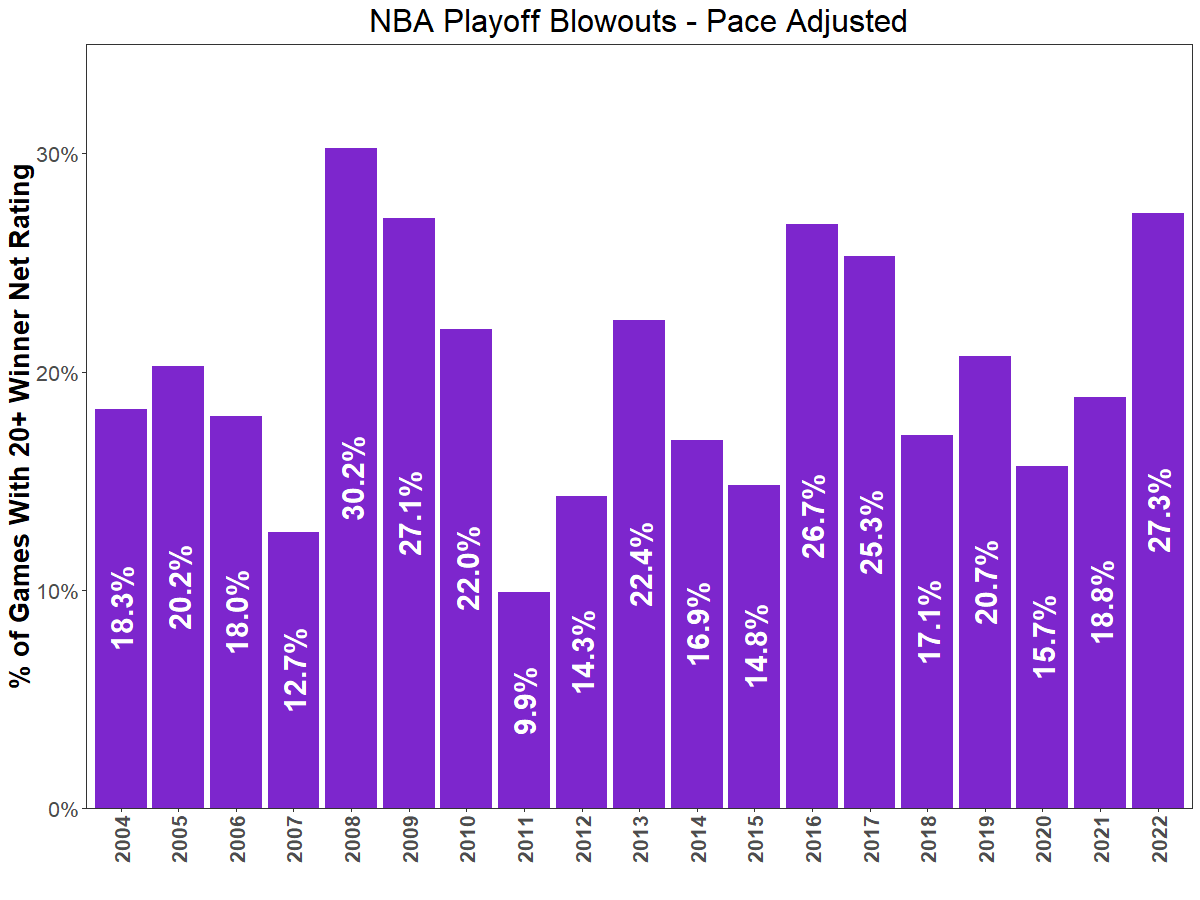 Of course, knowing it’s not the worst it’s ever been is scant consolation for an absence of fourth-quarter drama. But it should be noted that the increased pace, combined with an enormous rise in three-point attempts, makes for far more double-digit swings over the course of a game.

Before getting into why blowouts have been more common this year, it’s worth remembering that the playoffs historically sees more lopsided final scores than the regular season. Since 2003-04, 14.9 percent of regular-season games have ended with 20+ point margins compared to 17.6 percent of playoff games. Perhaps counterintuitively, the prevalence of blowouts actually increases in the later rounds despite the generally less competitive 1-8 and 2-7 matchups, with 18.7 percent of second and third round games being blowouts compared to 16.9 percent of first-round contests. Why this occurs is a fascinating question that’s too complicated to fully answer here, but several plausible and non-mutually exclusive theories exist:

Still, even against the backdrop of expecting more blowouts due to pace, 3-point shooting and all of the above factors, this postseason’s been a lot. So what gives?

First and foremost, a healthy dose of our old friend: shot-making variance. As you may have heard, the NBA is “a make or miss league.” With just over 37 percent of non-garbage time shots coming from beyond the arc these playoffs (per Cleaning the Glass), the scoreboard swings from making or missing are enormous, and only growing larger.

To use a quick-and-dirty definition of “three-point swinginess,” let’s consider the proportion of games by which any team scored at least 10 points more or less than they would have with a league-average 36 percent rate from 3 on the same number of attempts. Based on that, the prevalence of large variations from the norm has increased in general over time, as have the volume of 3-point attempts. On top of that, it’s particularly interesting to see that teams have been more likely to post really good or really bad shooting nights in the 2022 playoffs than the 2021-22 regular season: 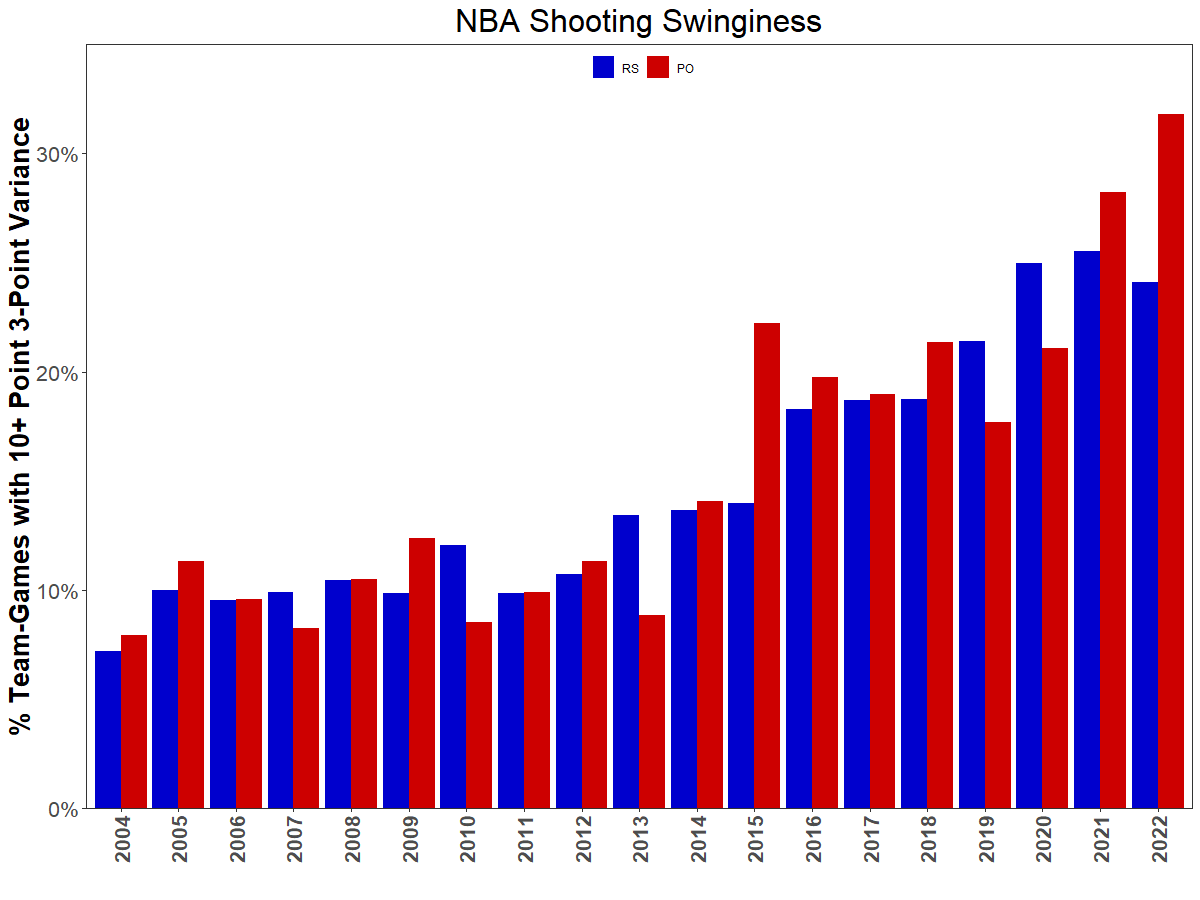 Only the 2015 playoffs saw a larger increase in what I’ll advisedly call “shooting luck games.”

The impact is fairly clear to see. According to Cleaning the Glass data provided exclusively to The Athletic (thanks to Ben Falk for doing so) five of the eight worst single-game half-court offensive performances of the postseason have seen the culprits trail by at least 25 points before garbage time. Two were Game 1 of the Milwaukee-Chicago first-round series, when Chicago’s 0.73 points per half-court chance cleared Milwaukee’s 0.70, while the worst was Miami’s putrid 0.58 half-court efficiency last night. Though the final margin was only 13, the game was over as a contest early in the fourth quarter.

All told, the seven teams responsible for those ghastly single-game outputs went a combined 53-of-250 (22.3 percent) from 3 in non-garbage time minutes.

These extreme shooting games, both positive and negative, account for 12 of the 22 20+ point blowouts. (Game 7 of Mavs-Suns saw Phoenix have the third-worst half-court offensive game at the same time Dallas put up the most efficient half-court offensive performance of these playoffs to date). Meanwhile, the wilder shooting variance illustrated above adds in 13 more instances of a team dramatically over- or under-performing average.

So while it is a bit reductive to say that the non-competitive games have resulted from wide shooting variance, that’s the largest factor explaining all these blowouts.

Perhaps the frequency of wild swings in 3-point production is another novel aspect of this weird season. Perhaps it’s the early stage of a new trend, which may have begun last year. Time will tell, as we need more of a sample to determine which one. Though for the sake of the indelible moments provided by late-game drama, we can only hope it’s the former.