The boom in natural gas exports creates massive demand on US production and connects US prices to the rest of the world.

By Wolf Richter for WOLF STREET.

Natural gas futures spiked to $9.40 per million Btu earlier today, the highest since dirt was young, well, since the huge twin spikes between 2005 and 2008. In afternoon trading, the price dipped to around $9 again, having tripled from a year ago, when it was $2.98, and having more than tripled from the $2-3 that predominated from 2011 through the spring of 2021.

Natural gas prices can spike and plunge, periodically taking down hedge funds that got caught on the wrong side. But this time, it’s different; this time, there are large-scale structural changes in the US natural gas market that have been in the works for years: Booming exports of natural gas as LNG has created a connection to the demand and prices in the rest of the world.

And the fracking boom that caused prices to collapse in the US starting in 2009, while prices soared elsewhere, is now being leveraged to export LNG, and we already kissed those collapsed natural gas prices of $2-3 per million Btu goodbye. 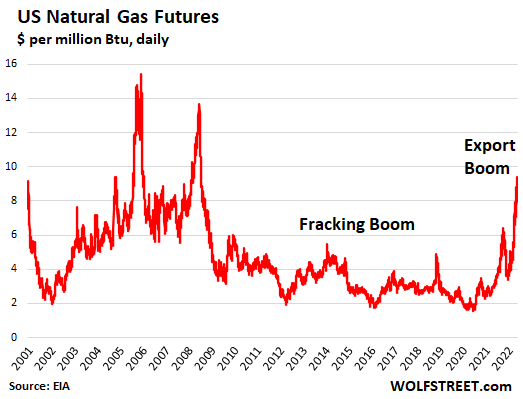 The fracking boom that took off in serious 15 years ago made the US the world’s largest producer of natural gas. Before the boom, the US had been a major natural gas net-importer (via LNG globally and via pipeline from Canada), and prices were influenced by global prices and by supply limitations in the US.

Production from the fracking boom created so much supply in the US by 2009 that the price collapsed. Between 2003 and 2021, marketed production of natural gas nearly doubled. Note the spike in production in 2018 and 2019: 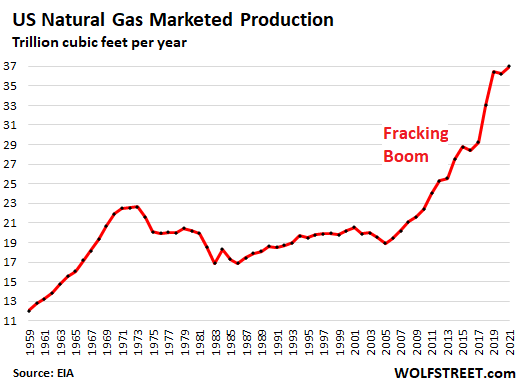 And starting in 2016, more and more LNG export terminals were being built to arbitrage the cost differential between US natural gas and global pricing of LNG; and pipeline capacity was added to export more natural gas from US producing areas near the border to Mexico. 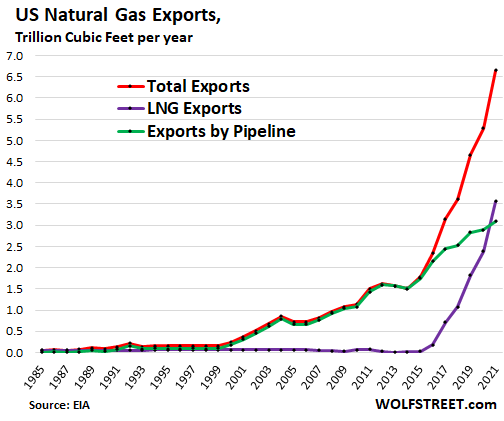 LNG exports require very capital-intensive liquefaction facilities that are connected to producing areas via pipeline. Export capacity soared from less than 1 billion cubic feet per day (Bcf/d) in 2015 to about 12 Bcf/d at the end of 2021. More large-scale LNG export facilities are under construction, and still more have been approved, and still more are in earlier stages of the process.

As US export capacity continues to grow, global demand for US LNG is competing to an ever-larger extent with demand in the US, which intensifies the link between global LNG prices and US natural gas prices.

And those dirt-cheap prices of natural gas of 2009 through mid-2021 that consumers, power generators, and industrial companies benefited from, and that bankrupted many oil & gas producers that specialized in fracking for natural gas, and that bankrupted coal miners, is now a thing of the past. Much higher prices, in line with pricing globally, are what the US has to deal with now.

Enjoy reading WOLF STREET and want to support it? Using ad blockers – I totally get why – but want to support the site? You can donate. I appreciate it immensely. Click on the beer and iced-tea mug to find out how:

Would you like to be notified via email when WOLF STREET publishes a new article? Sign up here.