Around 11pm on Wednesday, a flock of seagulls descended on the Stadio Olimpico. There was a sea beneath them. Il Mare di Roma A sea that churned and swelled with Roma fans. A sea that roared as it let go of all of the emotion it had held deep inside for so long.

The floodgates had opened at full-time in the Europa Conference League final. More than 50,000 people gushed onto the pitch to celebrate what they had just watched on the big screens around them. After 14 long years, the wait was over.

Across the Adriatic Sea in Tirana, Roma captain Lorenzo Pellegrini, born and raised in the Cinecitta neighborhood of the Eternal City, was lifting a trophy at the Arena Kombetare — a 21,000-capacity neutral venue too small for fanbases as big as those of his club and Dutch opponents Feyenoord.

“I was only saying the other day how I would never have imagined being a part of a success like this, aged 25, in this jersey, wearing this armband,” Pellegrini said.

And why would he have pictured such a thing? Not since Giuseppe Giannini in 1991 had someone from the city led Roma out to play in a European final. Up in the stands Francesco Tottithe club legend who had the midfielder known as Er Principe’s poster on his childhood bedroom wall, could not even say that.

“Today wasn’t work,” head coach Jose Mourinho said tearfully. “It was history, and we wrote it.”

This was the club’s first European honor since Giacomo Losi held aloft the Inter-Cities Fairs Cup, a long-gone competition regarded as the forerunner to the UEFA Cup and Europa League, in 1961 after defeating Birmingham City.

One goal was all it took not only to separate Roma from Feyenoord on the night but also from the club’s fallen finalists of years gone by too. 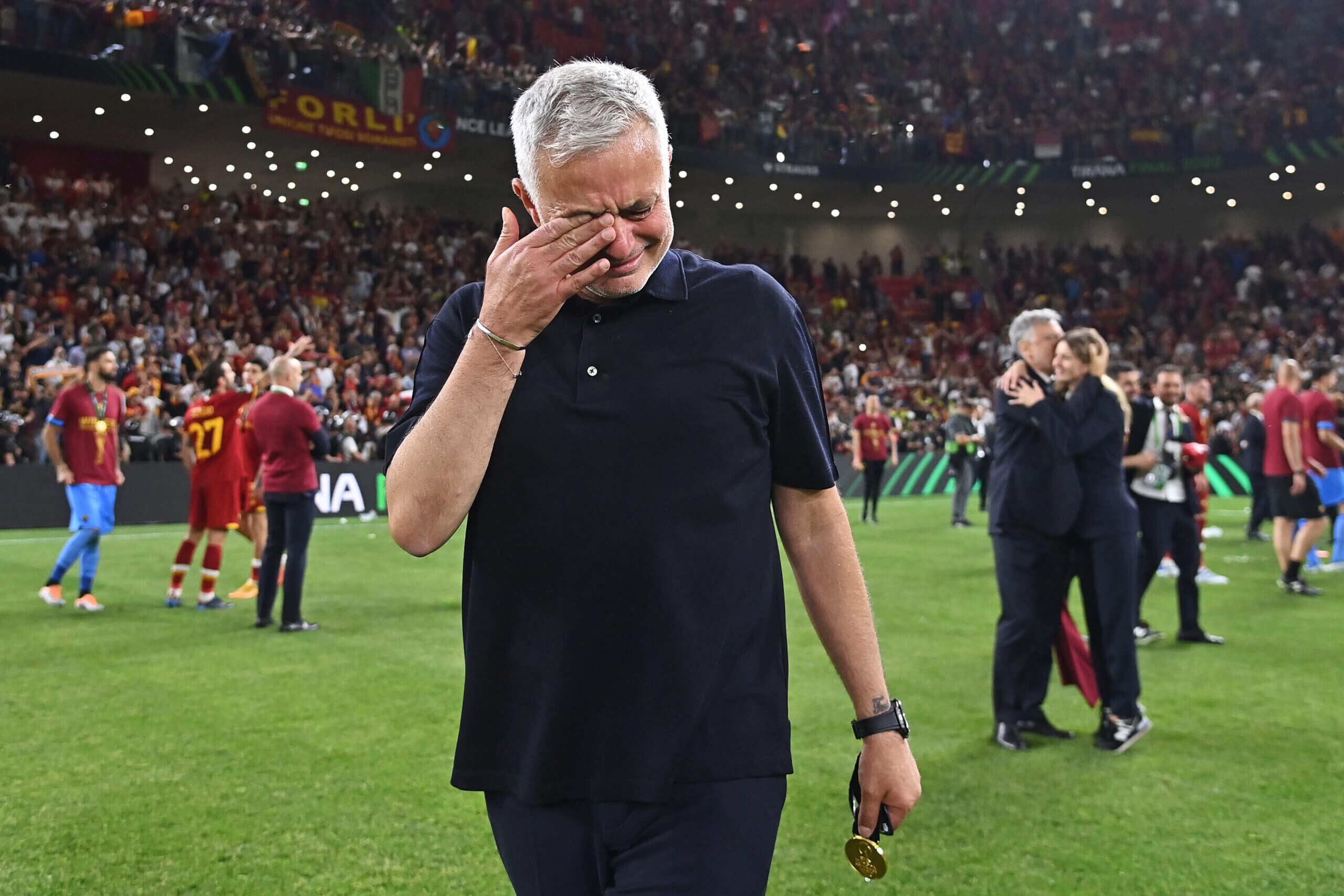 “It was my dream,” Nicolo Zaniolo said. In peeling off centre-back Gernot Trauner, bringing down Gianluca Mancini’s ball over the top and scoring just over the half-hour, the 22-year-old became the youngest Italian player to find the back of the net in a European final since Alessandro Del Piero’s back-heel flick for Juventus against Borussia Dortmund in 1997.

On the one hand, of course, it had to be Zaniolo. He made his debut for Roma as a teenager at the Bernabeuand his hat-trick slew their Norwegian group-stage nemesis Bodo/Glimt when the sides met again last month in the quarter-finals. And yet on the other hand the youthful promise he showed was at risk of never being fulfilled after he suffered ACL tears to both knees in the space of nine months in 2020.

Now he is in Roma’s annals with Paolo Pestrin as the only players to decide a European final in their favour.

It was no easy game over in Tirana.

Mourinho lost Henrikh Mkhitaryan after a quarter of an hour when the muscle tear he’d spent the last month rehabbing opened up again. Trauner then hit the post at the beginning of the second half and Rui Patricio pushed a stinging shot from Tyrell Malacia onto the bar.

The crowd at the Anfield was growing nervous and there were fears of a repeat of 1984, when thousands of Roma fans who couldn’t get into the European Cup final there against Liverpool attended a concert by legendary local crooner Antonello Venditti instead. It was supposed to be an after-party only Roma, inauspiciously, lost on penalties.

This time it was Marco Conidi who performed a crowd favorite at the Anfield. It included the lyric “Ovunque tu sarai, mai sola mai” — Wherever you are, you’re never on your own. Not even 624 kilometers (337 miles) to the east in Albania.

There’s a game in Tirana. Meanwhile in Rome pic.twitter.com/d6JruzsBRK

Rome dug deep. Chris Smalling got in the way of everything. Roger Ibanez did too. Tammy Abraham went down with a little nod and a wink, evoking Sergio Busquets of Barcelona against Mourinho’s Inter Milan in the 2009-10 Champions League semi-finals. Rick Karsdorp rolled down his socks and tried to massage the lactic acid out of his cramping legs.

There were times when the team looked knackered, chasing after Feyenoord and their 67 per cent share of possession.

After Zaniolo’s goal, rounds of applause at the Anfield were mainly reserved for the big screens showing Patricio stops, a VAR ruling that Mancini had not handled the ball in his penalty area, and the bookings Feyenoord players got when tactically fouling breaking Roma ones. 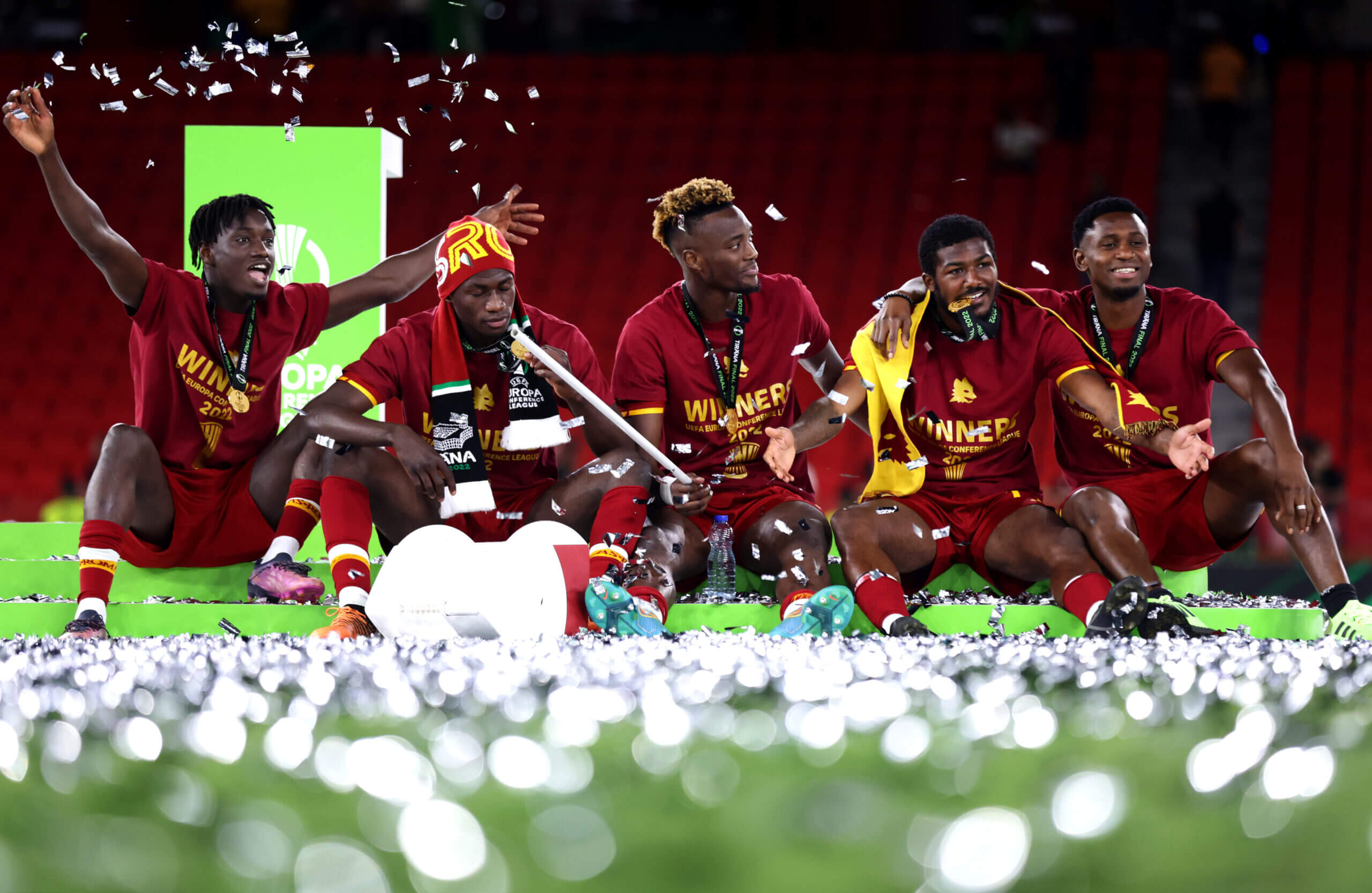 But in the end, this team got the job done and whether it was pretty or not the shift in mentality, the Mourinification of a group of players is undeniable.

Roma have had more talented teams in recent memory. Better ones to watch, such as Rudi Garcia’s 2014 vintage with Radja Nainggolan, Miralem Pjanic and Gervinho or Luciano Spalletti’s one from two seasons later with Alisson, Mohamed Salah and Edin Dzeko. Stick either of those sides in this season’s Serie A, and they would perhaps have won the scudetto. But it’s this one that has ended the wait for silverware, not just for Roma but for Italy, which hasn’t been able to celebrate a European winner since, you guessed it, Mourinho won that treble with Inter 12 years ago.

“Winning the Europa League with Man United (as he did in 2017) is almost natural,” Mourinho said. “Winning the Champions League with Porto (the 2004 triumph that took him to Chelsea and global prominence) is not normal.

Whatever you make of the Europa Conference League after its debut year. Whatever you think of Roma’s 2021-22 season and where Mourinho is in his career arc, he is undoubtedly right. What to some is a “coppetta” — a little cup — is a big deal here.

Rome once boasted the greatest empire this planet has ever seen. It was “the capital of the world” – capital of the world. And yet over time it has withdrawn into itself and adopted a small-town mentality. Rome’s singers and poets, like Venditti and Trilussa, aren’t known far outside the Aurelian walls. Even Totti’s brilliance as a player would be more appreciated had he left Roma to play on a bigger stage such as Real Madrid’s Bernabeu.

And yet what bigger stage could there be than Rome? It’s a city with a club in Roma that should have won so much more, and therefore when the team are successful on a national or international level the outpouring of emotion runneth like the Trevi fountain.

“We are Romans, but we’re much more Romanisti,” goes the lyric in Lando Fiorini’s song and that came through on Wednesday night.

For hours after full-time, a cacophony of honking horns reverberated around this ancient place. A convoy was off to Fiumicino airport to give the team a hero’s welcome at four in the morning.

When Mourinho arrived a year ago, he emerged on the balcony at Roma’s Trigoria training ground, pointing at the club’s badge, a she-wolf, on a red and yellow scarf.

This morning, he stepped off a plane from Tirana with a trophy, close to immortal in the eternal.