China’s state-run Global Times on Thursday strove to portray an “unprecedented national video teleconference on stabilizing the economy” with over 100,000 participants held by the State Council as the Communist government putting a firm hand on the economic tiller, but it looked more like a sign of growing panic in the regime.

The Global Times complained about Western media “badmouthing the Chinese economy” by reporting that growth could slow to two percent in 2022, well below the projected 2.8 percent growth of the dismaying US economy.

China’s growth target for the year was 5.5 percent. The Chinese economy has not grown more slowly than the US economy since 1990.

“Pessimistic predictions from the Western media about China have never turned out to be accurate, probably because their views about the Chinese economy have been distorted so much by their ideological bias and long-established political position that they are unable to understand the world’s second- largest economy,” the Global Times huffed.

The editorial insisted foreign investors are still eager to pour money into China – a debatable assertion the Global Times could only try to support by citing foreign capital totals from 2021, long before China’s manic coronavirus lockdown in Shanghai started making overseas investors nervous. 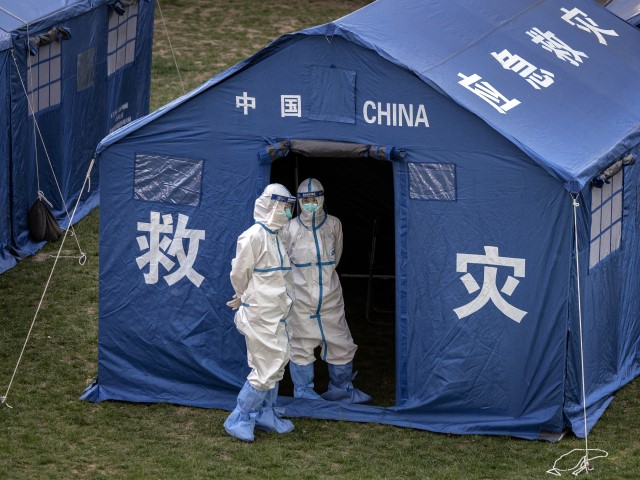 Health workers wear protective suits as they stand outside a tent while waiting to perform nucleic acid tests to detect COVID-19 on local workers at a makeshift testing site in Haidian District on April 26, 2022 in Beijing, China. (Kevin Frayer/Getty Images)

“There is no denying that the epidemic outbreak has caused some shocks to economic activities, but it did not hurt the fundamentals of the Chinese economy. China remains to be one of the fastest-growing major economies around the world, with a huge potential for infrastructure upgrading, a massive domestic consumption market, and a resilient manufacturing sector,” the Global Times insisted.

The Chinese Communist paper claimed one of the regime’s unbeatable advantages is that “once the problem is identified, the government can mobilize massive, national resources to address it, and past experiences tell us that it always works out well in the end.” The long-suffering captive population of Shanghai might beg to differ. 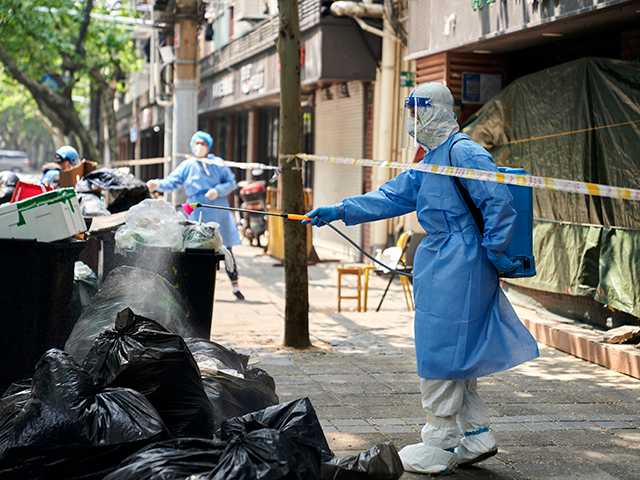 Smoothly functioning governments that have everything under control do not hold emergency teleconferences with 100,000 participants.

The Western media report that made the Global Times so apoplectic was filed on Thursday by Bloomberg Newsand spoke of “rising anxiety from within China’s government about the impact of its Covid Zero policy on the economy.”

Li reportedly said the lockdowns of March and April might have inflicted more economic damage on China than the original outbreak in 2020. Some of the corrective policies touted at the emergency meeting involve backing away from lockdown restrictions without admitting the “zero Covid” policies were a mistake.

According to the report, Shanghai residents are resentful that it has taken three weeks for them to emerge from a seven-week lockdown, and they still are not fully open yet, while the national capital of Beijing refuses to impose a similar lockdown because it would inconvenience Communist Party royalty, scare foreigners away, and embarrass China politically.

“China has fallen to second-last in Bloomberg’s Covid Resilience Ranking of the best and worst places to be in the pandemic, as outbreaks trigger curbs on mobility and the functioning of business and everyday life,” the report said, a condemnation guaranteed to raise the blood pressure of Chinese state media editorialists.

The Economist proposed on Thursday that coronavirus lockdowns are only one of two devastating blows to the Chinese economy. The other is a package of economic initiatives pushed by dictator Xi Jinping known as the “new development concept,” and it has not been faring very well:

The goals are rational: to tackle inequality, monopolies and debt, and to ensure that China dominates new technologies and is fortified against Western sanctions. Yet in all cases Mr Xi believes the party must take the lead, and implementation has been punitive and erratic. A blizzard of fines, new regulations and purges has caused the dynamic tech industry, which contributes 8% of GDP, to stagnate. And a savage but incomplete crackdown on the property sector, responsible for over a fifth of GDP, has led to a funding crunch—one reason why housing sales fell by 47% in April compared with a year earlier.

The Economist faulted Xi for “expanding the scope of the least productive part of the economy: the government-run one.” Meanwhile, private-sector investors are facing more expensive capital and grappling with apprehension that the Chinese Communist Party will cap their profits and wallop them with more expensive regulatory burdens. Innovation and ambition in the Chinese tech sector is giving way to the pursuit of government subsidies.

A telling sign of much deeper anxiety than Chinese state media wants to admit is that tech giant Alibaba has not provided any financial guidance for the fiscal year, which began last month. The company said it was no longer able to predict the risks arising from coronavirus outbreaks and lockdowns. Alibaba has now lost an astonishing three-quarters of its market value since late 2020.