Being the first in-person meeting since 2019, this year’s meeting was particularly exciting, providing opportunities for researchers across all career stages to interact and exchange ideas.

Although it’s difficult to capture the breadth and innovation of the research presented, I would like to highlight two presentations that truly surprised me. The first deals with how we perceive transparency on moving surfaces; the second reports an intriguing relationship between walking and perceptual performance.

Transparency in moving objects is based on common fate.

A new set of studies by Zhehao Huang and Qasim Zaidi investigates how the visual system determines whether a surface is opaque or transparent. This distinction may seem straightforward at first, but the perceptual computations required to distinguish transparent from opaque surfaces are still not well understood. Past research has highlighted the importance of “T-junctions” and “X-junctions” in judging transparency. 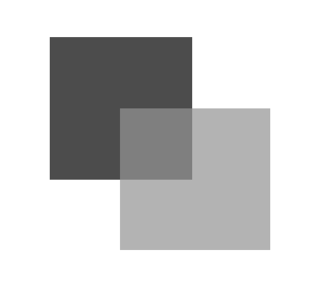 The lighter square appears transparent based on the shading and intersections.

For example, in the figure to the left, the light gray square is perceived as transparent because the middle gray square reveals the correct shading and intersections; it looks like the lighter square is revealing part of the darker gray square beneath it. 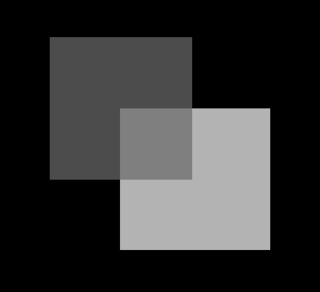 The background color can change which square looks transparent.

The second figure shows the same image, except the overall background color has been modified to black. This seemingly irrelevant modification completely changes our perception of transparency, with the darker gray square now appearing transparent, revealing part of the lighter gray square beneath it.

In both figures, it is believed that the particular shading, junctions, and intersections contribute to our perception of transparency.

However, the new research presented by Huang and Zaidi (published in this month’s issue of Journal of Vision) reveals a much more important factor: common fate, the idea that things that move together belong together. In a striking video demonstration (presented in figure 9 in their paper), the authors show that as long as the elements in a surface move the correct way, the surface will be perceived as transparent, even if the T-junctions and X-junctions don’t match up. You can watch the five-second video demonstration here.

Walking and perceiving at the same time.

In the talk session on perception and action, researchers from the University of Sydney used virtual reality to measure how the simple act of walking can affect performance on visual tasks. Participants wore a head-mounted virtual reality headset and walked up and down a virtual corridor while simultaneously completing one of two perceptual tasks.

The first task involved tracking a virtual moving target with their hand as they walked. In the second task, participants had to monitor when a visual pattern presented in front of them increased in contrast, all while walking along the virtual corridor.

Matt Davidson and co-authors were interested in whether performance in these tasks changed systematically as a function of the walking cycle. In particular, the aksed: is performance higher or lower at different moments of the gait-cycle: 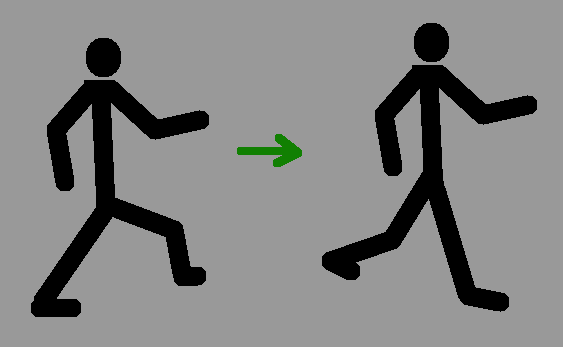 Does visual perception change as we walk?

By analyzing performance across many trials, each occurring at slightly different phases of participants’ walk cycle, the researchers found a clear relationship: performance on the tasks was consistently lower around the moment when the walker’s foot hit the ground compared to the other phases of the walk cycle.

Although the reasons for this are still unclear – it could be due to a slight visual jitter created by each step, or it could be due to an increase in focus during the gliding phase of the walk cycle – they demonstrate that our daily actions, such as walking, can have a direct influence in our perceptual processes.

The research also highlights the advantages of using virtual reality in research, allowing researchers to study perceptual behaviors that mimic everyday phenomena with the precise control afforded by the virtual reality technology.

The Vision Sciences Society is a nonprofit membership organization of scientists interested in the functional aspects of vision. You can read more about the society and the annual meeting here.