Animoca Brands and its subsidiary Blowfish Studios announce the Planet Genesis Public Sale, a chance for players to own a piece of Phantom Galaxies in the form of unique Planet NFTs. The Public Planet Sale starts 26 May on Forj Launchpadand on 27 May at 12 am (UTC) on the game’s website and OpenSea. Phantom Galaxies‘ recent Private Planet Sale’ generated US$19.3 millionindicating strong demand for real estate in the open-world mech combat game. 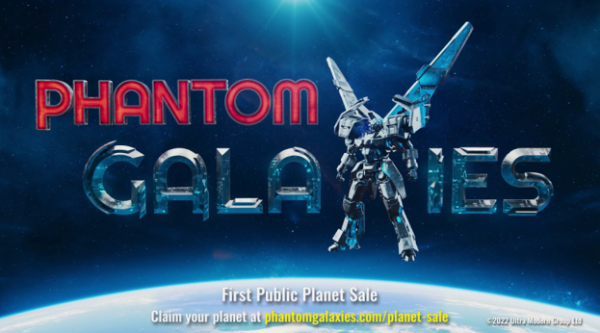 Phantom Galaxies is an open-world mech combat game, currently in public Alpha release. As one of the first blockchain-based game titles with AAA scope and quality, Phantom Galaxies is drawing in both traditional gaming enthusiasts as well as Web3 natives. Three of the four episodes of the Alpha version are available now, and early access to the Beta launch is expected to occur in Q3 2022.

The Planet Genesis Public Sale will allow buyers to purchase Asteroids and Planets (referred to collectively as “Planets”) in a range of sizes. A full guide to Planet sizes and prices is available hereand step-by-step instructions on how to prepare for the Planet Sale can be found here. Ownership of a Planet is not required to play Phantom Galaxies.

Each Planet will have its own coordinates within the Phantom Galaxies universe and randomized traits that will make it unique. Planets confer a number of benefits to owners: each Planet generates a regular emission of the Phantom Galaxies governance and utility token based on its size, and also offers various in-game opportunities, allowing players to govern their Planets as they wish and build a range of structures including marketplaces, hangars, refineries, and more.

Each Planet will buy a minimum amount of the Phantom Galaxies token by default. Gameplay factors such as visits to a Planet, development and construction, and completion of missions will enable players to gain a multiplier that significantly increases the amount of tokens generated by their Planets. This approach incentivises play and is part of the ‘gameplay first’ core values ​​of Phantom Galaxies.

The Phantom Galaxies token will be the main governance, utility, and currency token in the game, used for upgrading mechas, developing planets, exercising voting rights in guilds and organizations, and much more. The first opportunity that players will have to earn Phantom Galaxies tokens is the upcoming Astrafite Rush eventwhich will offer massive token rewards for Planet owners.

There are currently over 125,000 users playing the Alpha version of Phantom Galaxies and over 500,000 owners of the NFTs granting access to the Alpha game. These NFTs have generated a trading volume on OpenSea of more than 1,700 ETH (equivalent to over US$3 million based on current exchange rate).

2021 TECHTIMES.com All rights reserved. Do not reproduce without permission.