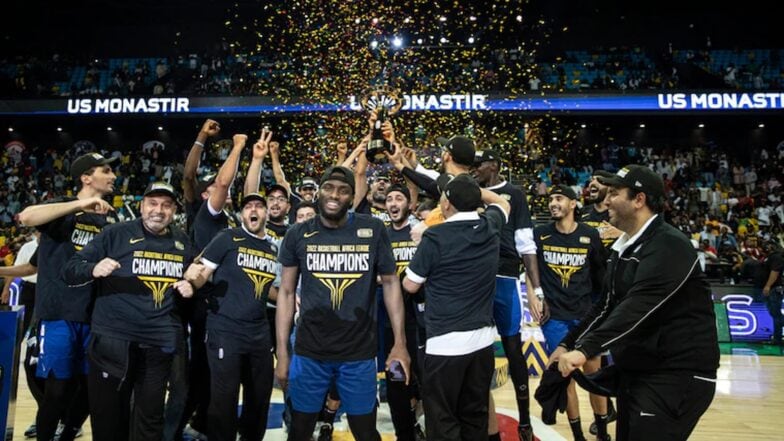 US Monastir celebrate the 2022 BAL Title.

Michael Dixon erupted to a performance for the ages on Saturday to help US Monastir clinch the 2022 Basketball Africa League title in Kigali.

Dixon had a 7 of 10 shooting night to finish with a game-high of 21 points as the Tunisian champions fought back to beat Petro de Luanda 83-72.

The 31-year-old point guard dished out 6 assists, and, in the process, US Monastir clinched their first-ever continental trophy.

Dixon was voted the 2022 BAL Most Valuable Player.

The runners-up of last year faced countless adversities for most of the game, but they were determined to make history, and, they did it.

From sitting out Ater Majok and Slimane Radhouane for long stretch of time due to foul trouble to struggling to score from behind the arch in the first half, Monastir’s determination and tenacity proved to be the game-changer.

Firas Lahyani came in handy for Monastir when the Modrag Perisic’s team needed him most.

The “Air Tunisian” as he is known in basketball circles, contributed 21 points on a 6-for-9 shooting, and grabbed a game-high of 10 rebounds.

Souleyman Diabate, who came off the bench to contribute 4 four points, became the first player to win two BAL titles.

Majok picked his fourth foul with 6:02 minutes left in the in third quarter, forcing coach Modrag Perisic to bench him and protect him from a potential early exit of the game.

The 6-foot-11 center, who won the 2022 Dikembe Mutombo BAL Defensive Player of the Year, came back later in the fourth to score four points from two thunderous dunks, making Petro look helpless.

US Monastir opened the score through a Slimane’s layup, and closed the first quarter trough a Diabate individual play.

Early in the game, Dixon hit shots from almost everywhere.

From mid-range shots, three-pointers to free-throws, Dixon sparked Monastir to a 18-17 lead at the end of the opening quarter.

Using a combination of 3-pt shots from Gerson Goncalves and Carlos Morais, Petro went on a 8-0 run to close the half in front 40-33.

US Monastir finished 0-8 from behind the arc in the first half, and to make matters worse for the Tunisian champions, its bench was outscored 17-2 before the break.

With Majok and Slimane in foul trouble, Persic had to make major adjustments without two of his most important players.

Despite the seven-point lead at the break, the question was whether or not Petro would be able to maintain their composure and fight until the final whistle.

It turned out, Petro panicked later in the fourth, missing countless free-throws, and turned the ball over in critical moments.

With so many adversities and trailing by just two (59-57) at the end of the third quarter, Monastir had to feel confident about themselves.

Dixon hit a 3-pt that earned Monastir a 60-59 lead – their first lead in the second half of the game -, a moment that relaunched Monastir in the game.

Jone Lopes, who turned 32 on Saturday, had a subpar performance, contributing just 2 points before fouling out 8:09 minutes left. His replacement, Moreira was on the limit himself with four fouls, and fouled out with 1:08 minute left.

Monastir capitalized from an unsportsmanlike foul on Carlos Morais that allowed them to stretch their lead to 72-67 with less than three minutes to play.

The last straw came after a Radhouane grabbed an offensive rebound after Julius Coles Jr’s missed 3-pt attempt to put Monastir in the driving seat with a 78-72 lead and 30 seconds left.

After a Petro de Luanda timeout, Lahyani stole the ball from Gakou before sealing the 83-72 victory.

Gerson Goncalves led the way for Petro with a game-high of 28 points, Moreira added 18 points and Morais contributed 12 points. No other Petro player scored in double digits.

Eventually, the night belonged to US Monastir who completed a treble after winning the Tunisian League and Tunisia Cup.