An astrophotographer has captured a 286-megapixel image of the sun during the most intense period of solar activity in decades.

The picture shows huge fireballs circling on the surface of the sun, and can be zoomed in to see the full fiery mass in extreme detail.

Andrew McCarthy, known to his online followers as @cosmic-background, took the pictures through a telescope last week, being careful not to be blinded by the harsh rays.

The high-definition image is a mosaic of about 50 tiles, each made up of 600 layered photos.

The photographer has been pointing his telescope at the sun for three years, and says it’s currently the ‘most active I’ve ever seen it’.

The sun appears to be moving into a particularly active period of its 11-year cycle of activity, which began in 2019 and is expected to peak in 2025.

It is producing solar flares and coronal mass ejections (CMEs) – powerful bursts of energy that can direct dangerous blasts towards the Earth. 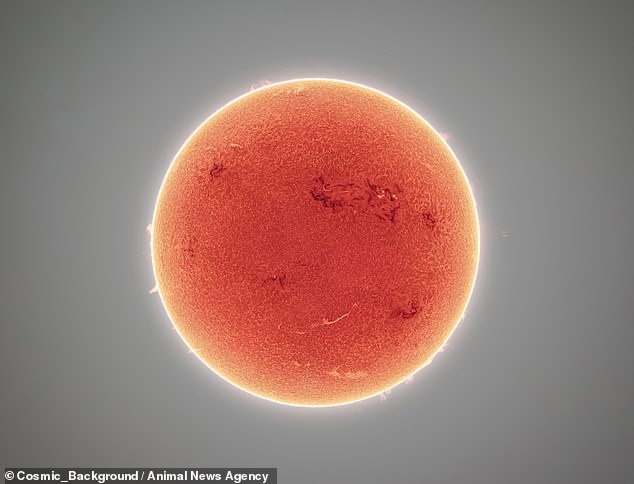 US astrophotographer, Andrew McCarthy, chose 30,000 photos to create a mosaic image that captured the sun in high definition from Florence, Arizona, USA 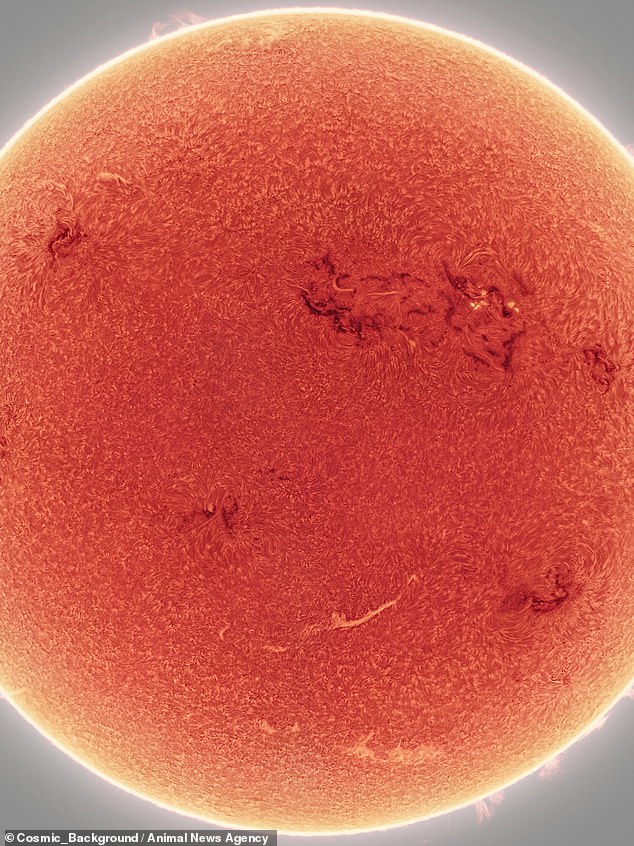 The image captures the dark spots, known as active regions, on the sun’s surface as well as bright sunspots that burst from the fireball 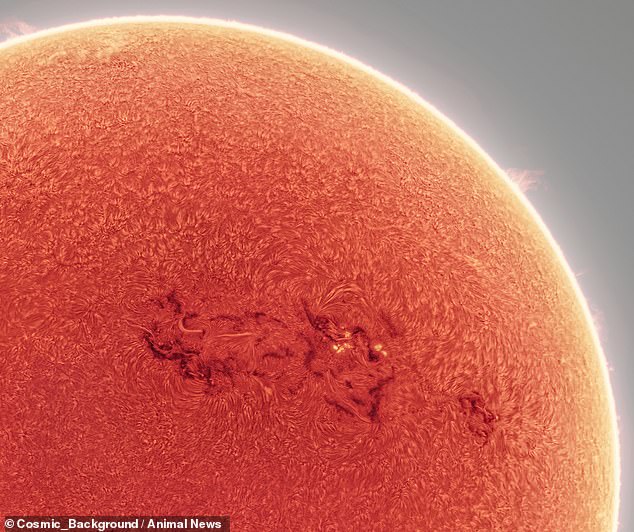 The ‘fluffy’ areas on the outer limb are pockets of plasma caught in the magnetic field, with lighter areas, known as ‘filaments’ spread across the rest of the sun

Andrew said: ‘Seeing the full sun at this level of detail is probably not something many people have ever seen in their lives.

‘During a period of heightened solar activity, the sun will look like this all the time. This image is more a sign that the 11-year cycle is nearing the maximum portion of its activity.

‘Going through 100,000 photos by hand was the most tedious part of the final image.

‘Throughout most of the process, I didn’t even know I would have a decent image at the end. I was thankful when it turned out as well as it did.’

The image captures the dark spots, known as active regions, on the sun’s surface as well as bright sunspots that burst from the fireball.

WHAT ARE CORONAL MASS EJECTIONS?

Coronal mass ejections (CMEs) are large clouds of plasma and magnetic field that erupt from the sun.

These clouds can erupt in any direction, and then continue on in that direction, plowing through solar wind.

These clouds only cause impacts to Earth when they’re aimed at Earth.

They tend to be much slower than solar flares, as they move a greater amount of matter.

CMEs can be triggered when a storm on the surface of the sun causes a whirlwind to form at the base of plasma loops that project from the surface.

These loops are called prominences and when they become unstable they can break, releasing the CME into space.

The solar chromosphere, a layer in the sun’s atmosphere, can be seen as a very slim layer of hydrogen alpha light due to Andrew’s telescope being precisely tuned with a 5-inch refractor.

More ‘fluffy’ areas on the outer limb are pockets of plasma caught in the magnetic field, known as prominences, with lighter areas, known as filaments, spread across the rest of the sun.

From these, sunspots, flares and coronal mass ejections erupt, capable of frying the Earth’s surface if they came close enough.

It was processed in false color due to the filters Andrew had to use to photograph such a bright subject.

The two filters he used with his specialist telescope, in order to prevent a fire, and the photographer going blind.

The colors are also partially inverted – hence why the sunspots appear dark – in order to visualize the prominences.

Andrew captured the masterpiece through a telescope in his backyard in Florence, Arizona, USA.

‘I spent about four hours capturing the sun this day, most of which was spent capturing the two-hour long timelapse of the sunspots,’ he said.

‘The full sun was captured over a period of about 45 minutes but took several days to process.

‘This day it was particularly windy, so I had to go in and manually remove bad images where the wind had knocked my scope around.’ 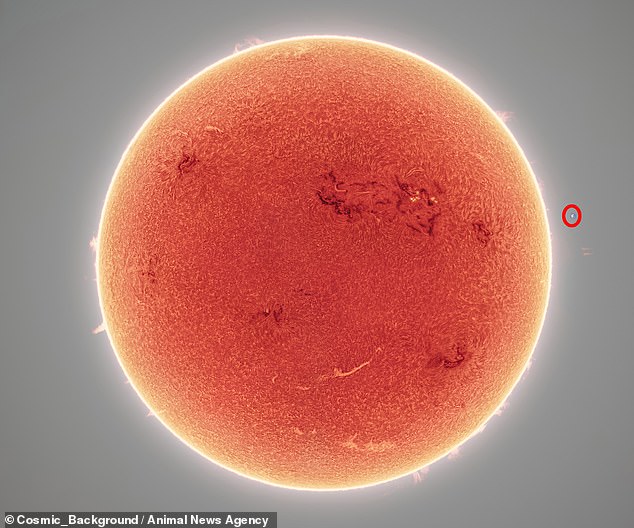 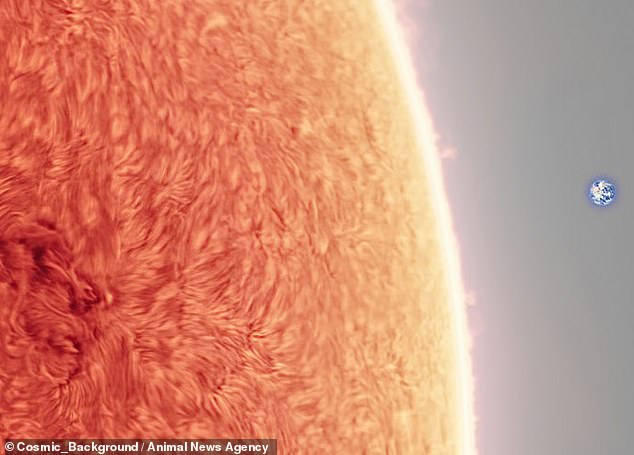 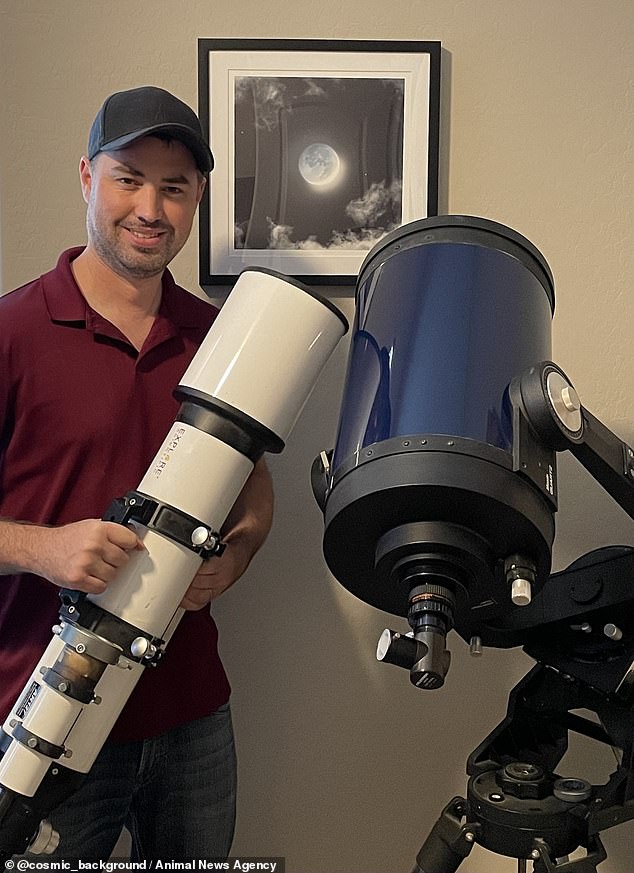 Andrew McCarthy required a specialist telescope with two filters, in order to prevent a fire, and going blind. The filters meant the colors in the photos are partially inverted

In December, Andrew captured what he described as the ‘clearest ever photo of the sun’.

He layered 150,000 individual pictures of the sun to convey the intricate stunning detail of the solar system’s largest star.

All can be seen within the huge final 300 megapixel image – 30 times bigger than a standard 10 megapixel camera image.

Despite his actions, Andrew is keen to urge others not to look directly at the sun unless they have specialist equipment.

He said: ‘Do not point a telescope at the sun unless you know what you’re doing.

‘Seeing a lot of activity on the sun is always thrilling for me as an amateur solar astronomer, and it represents an opportunity to share something new with my audience on social media.

‘For that reason, I’m always very thrilled to see something new. These images were particularly challenging to get due to conditions, so having them turn out as well as they did was exciting.’ 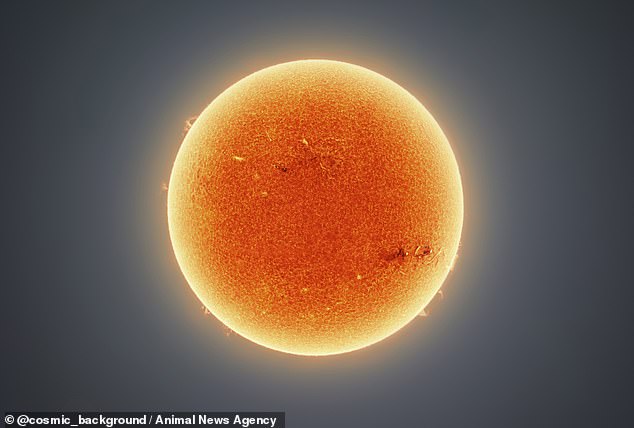 Andrew McCarthy layered 150,000 individual pictures of the sun to convey the intricate stunning detail of the solar system’s largest star in December 2021 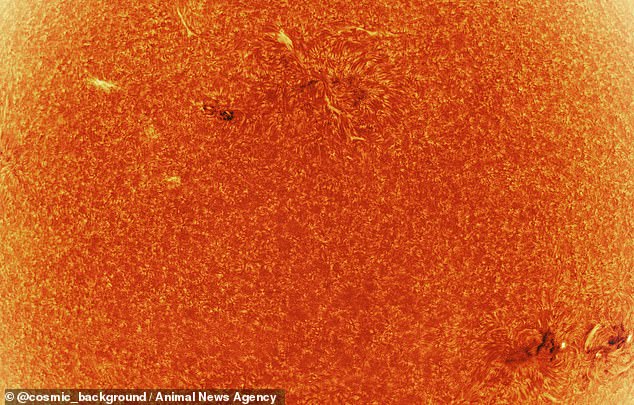 According to a model from physicists at the University of Warwick and the National Center for Atmospheric Research (NCAR), the current solar cycle will be one of the top few ever observed.

The solar cycle is an approximately 11-year cycle of solar activity driven by the sun’s magnetic field, measured in terms of variations in the number of sunspots.

The scientists predicted we would observe a maximum sunspot number somewhere between 210 and 260 in Solar Cycle 25, which started in December 2019.

It means the sun could be producing more electrons and protons than before, making solar flares and coronal mass ejections (CMEs) more frequent then in the last decade.

Our star has been experiencing heightened activity for some months and last month unleashed its most powerful solar flare seen in five years.

Scientists are concerned that the sun’s increased activity could lead to potentially dangerous solar weather which may damage electrical grids, knock out satellites, and harm astronauts and space equipment on the International Space Station.

THE SUN: THE BASICS

The sun is the star at the heart of the Solar System, a nearly perfect sphere of hot plasma, radiating energy.

Three quarters of the star is made of hydrogen, followed by helium, oxygen, carbon, neon and iron.

It is a G-type main sequence star and is sometimes called a yellow dwarf.

The Sun formed from the gravitational collapse of matter in a large molecular cloud that gathered in the centre.

The rest flattened into an orbiting disc that formed everything else.