Nicola Ryan is concerned about rising inflation. Not just the impact of price increases on her personally, or on her employer One and All, a school uniform maker based in Stockport, north-west England. She’s worried about the impact on all her co-workers who are trying to manage their household budgets. “We’re in a real crisis,” says Nicola, who is director of colleague support. “We know [staff are] really worried.” The summer months will be relatively easy compared with October, when the “pinch-point will be rising” [energy] bills.”

One and All has increased wages by 4.5 per cent for everyone except directors — an increase that would look generous in normal times, but now falls short of UK inflation, which hit 9 per cent last month and is expected to reach double digits in the autumn . But the company is doing its best to target help towards those in lower-paid roles, including manufacturing and warehouse work.

It has increased the profit share for all staff, which it expects to be worth more than £2,000 per person this year, and set up an emergency fund to help those who are struggling. “We were really honest and said this was due to the cost of living crisis,” says Ryan. “We are preparing for October.” This is on top of existing interest-free crisis loans for unexpected bills such as a boiler breakdown and free financial management advice. One and All is accredited by the charity Living Wage Foundation (which sets its “real” living wage at £9.90 an hour in the UK and £11.05 in London) and is also committed to “real living hoursguaranteeing predictable shifts of at least 16 hours a week.

After two years of pandemic upheavals, employers in the UK — as in much of the developed world — are contending with rising costs. Although average wages are rising rapidly, by historic standards, inflation is rising even faster. Government support of the kind announced on Thursday by the UK’s chancellor, Rishi Sunak, will help a lot but it will not plug the gap for everyone, and many families will still be feeling the strains. And while some companies say they cannot afford to pay workers more, others feel both an ethical imperative and intense commercial pressure, against a backdrop of labor shortages, to help those on low incomes.

“Organizations are saying that they are struggling on affordability but they feel a moral obligation to help employees. They are trying to make their benefits package the best it can be,” says Sheila Attwood, managing editor at the research group XpertHR, which tracks pay settlements by UK employers. 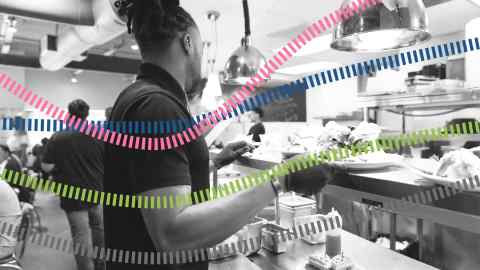 During the pandemic, many companies strengthened sick pay arrangements or offered new benefits relating to wellness and mental health. Now the focus is shifting to food, child care or transport. In the UK, the supermarkets Sainsbury’s and Iceland have increased staff discounts, while the Norfolk and Suffolk NHS Foundation Trust has set up a staff food bank.

In the US, some employers are offering help with driving expenses, according to Becky Frankiewicz, president of ManpowerGroup North America, a multinational staffing company. “Gasoline subsidies are a new incentive. Transportation vouchers and [help with] rideshares for the under $20/hour worker, that’s fairly widespread.”

In France, tax breaks give employers an incentive to offer lunch and holiday vouchers, and business group Medef has proposed that the levy companies pay to fund public transport could be redirected to help car commuters fill their tanks. Take-up of the “prime Macron”, a tax-free bonus that employers can offer low-paid workers, has been low. Economy minister Bruno Le Maire has encouraged companies to do more.

Recent research by the CEBR found that 10 per cent of UK employees missed days at work due to financial problems, while a further fifth of workers were less productive because they spent working hours worrying about money — at a total annual cost to businesses of more than £6bn. However, employers are wary of taking on responsibility for everyday living costs, such as energy. “Most companies believe it’s best addressed through fixed pay. It provides more security. Allowances are hard to stop,” says Alasdair Wood, senior director at the consultancy Willis Towers Watson.

Many employers remain tight-lipped about the issue, says Norman Pickavance, an HR director and leader in financial inclusion. “Tackling it means acknowledging the problem — which means they have to do something about it.” The most obvious solution is to increase pay, he points out. “Everything else looks like window dressing.”

Yet the UK’s CIPD — representing HR professionals — says even when employers cannot afford to raise wages, they can still follow good practices to protect staff from poverty.

One is to ensure the lowest-paid employees receive a fair wage. In the UK, the number of accredited Living Wage employers has almost doubled since the start of the pandemic. Under pressure from activist investors, Sainsbury’s this year began paying the real living wage to its direct employees, as have other supermarkets, although it is not formally accredited.

Greater flexibility around wages can also help. Aviva, the insurer, is among companies that allow staff to sell back unused annual leave. And Willis Towers Watson says employers in low-wage sectors are increasingly adopting tools such as Wagestream, which offer instant access to earned pay. There are concerns around such apps — which carry transaction charges, and could simply delay financial difficulties. But employers in areas such as hospitality and care say they are better than payday loans.

Other forms of flexibility also count, with many white-collar workers now questioning the value of commuting. Tim Oldman, chief executive of Leesman, a workplace research company, says: “We’ve had two years without commuting costs [on] our monthly salaries. Around the world, employees are considering the cost of the commute.”

A financial wellbeing app on its own won’t do any good. But you can get a lot of help from a decent financial education. . . as part of the strategy

Some companies are now repositioning homeworking as a cost of living rather than a work-life balance matter. Neil Carberry, chief executive of the UK’s Recruitment & Employment Confederation, says: “Firms are thinking very flexibly about meeting employees’ concerns. . . Hybrid working reduces commuting costs and in this environment is more attractive.”

There is also a new focus on pay and career progression, says Duncan Brown, an independent adviser on reward management. Many low-paid jobs offered “a fixed rate with no progression or career structure”, he says, but his 20-something children would now ask as a matter of course at interviews when pay would be reviewed.

Frankiewicz agrees: “The most exciting thing is that employers and employees are now realizing that blue-collar workers are expecting and demanding a career plan.” Traditionally this has been a white-collar incentive.

Whatever their longer-term prospects, some employees are going to struggle over the next few months. Some employers are offering targeted help: John Lewis, the employee-owned retailer, is doubling its Financial Assistance Fund, acknowledging staff will find it “tough financially”. Most, however, do not step in directly: the buzz in HR departments around “financial wellbeing” generally translates into offers of financial education and budgeting tools; nudges to save more in a pension; or perhaps signposting towards debt advisers where needed.

For those workers whose problem is a lack of pay rather than the ability to manage money, this can look like a cynical distraction. But advisers say they help “normalize” conversations about money worries. “We’ve been encouraging employers to get people to talk about money issues more openly,” says Charles Cotton, a senior adviser at the CIPD.

“Companies should look at these things in the round,” says Wood. “A financial wellbeing app on its own won’t do any good. But you can get a lot of help from a decent financial education, like tracking your expenses as part of the strategy.”

Employers will have to pay closer attention to workers’ personal circumstances as the income squeeze worsens. “Companies are learning as they go along,” says Wood, observing that most senior executives do not have experience of leading companies through a period of high inflation. “The key thing is uncertainty,” he says. “Nobody knows when this will end.”