Pop into Snap’s offices and you might see some curious things. Butterflies fluttering around the lobby. Zombies in the canteen. The entire solar system on the terrace.

Snapwhich began life as photo-messaging app Snapchat, has been a pioneer in “augmented reality” But instead of peering through a smartphone app to view these effects, I saw them through what almost felt like normal glasses.

Snap’s newest “Spectacles” are not widely available, but the demo I had showed promise. When I held out my hand, a butterfly appeared to land on it. I clicked a button on the frames and the glasses told me what I was looking at. Images were bright and clear — although a big limitation is the batteries last just 30 minutes.

Snap’s Spectacles are the latest in a long line of intriguing headset prototypes I have tried over the past decade. So far, none of them has gone on to become a hit. I first tried an early version of the Oculus virtual reality headset at the Consumer Electronics Show in 2014. It remains the most impressive demo of a new technology I have ever experienced. I felt like I had put my head inside a video game. I wasn’t the only one. Mark Zuckerberg liked Oculus so much he bought the company for $2bn.

It’s been a decade since “virtual reality” re-entered the lexicon, but the technology has largely failed to break out into the normal world. In 2016, Goldman Sachs predicted there would be almost 100 million VR and AR headsets in use by 2020. The number today is estimated at closer to 10 million.

While Facebook’s founder remains more enamored than ever by VR, I have given up waiting for the rest of the world to be wowed. There are several fun VR games, such as Rec Room and Beat Saber. Some colleagues swear by VR workout apps. But despite hardware improvements, I still struggle to find reasons to boot up my Oculus.

Nevertheless, Silicon Valley is gearing up for another attempt to convince us that the future of computing is on our faces. Apple, Facebook-owner Meta and Google are working on glasses and headsets in all shapes and sizes. Snap’s Spectacles are a harbinger of several AR devices launching this year.

All of them face the same impossible choices: better graphics mean heavier headsets and batteries that run out sooner. Compromise on optics and the utility disappears.

What struck me with Snap’s demo was how comfortable its glasses are. They look pretty sci-fi but are nowhere near as bulky as other AR headsets, coming in at less than a quarter of the weight of Microsoft’s HoloLens 2. 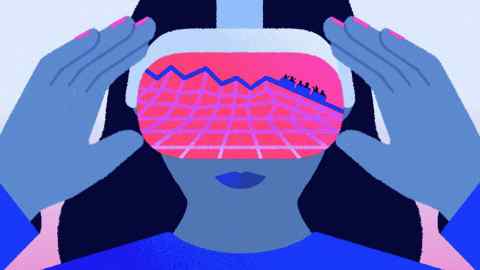 Google recently demonstrated similarly unobtrusive glasses that seemed to show near-instant transcription and translation of a foreign language as it is spoken. “Kind of like subtitles for the world,” according to the promotional video. By contrast, Apple and Meta appear to be opting for the full-fat experience: high-resolution AR headsets that look more like ski goggles than glasses.

There’s an argument that anyone’s first demo of VR or AR is just too good. The first time you turn your head in VR or see holograms in AR, it is incredible. Only on repeat viewings do you realize how cumbersome the hardware is. The next 12 months may determine whether that turns out to simply be a new platform’s growing pains or the technology’s epitaph.